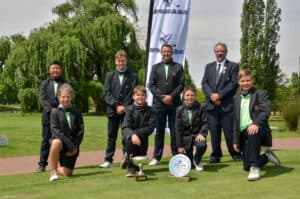 Ekurhuleni closed out a seven-stroke victory in the 2021 Nomads SA U-13 Championship at ERPM Golf Club; credit Ernest Blignault.

7 October 2021 – Ekurhuleni held on for a popular home win in the Nomads SA Under-13 Championship, edging Border by seven strokes at ERPM Golf Club.

“Martin was a former president of the Ekurhuleni Golf Union and he was deeply invested in junior golf development,” said Coetzee. “He was extremely passionate about our juniors and he knew all the boys on the team, so this is quite an emotional win for us. We’d like to dedicate this victory to Martin, who would have been very proud of their achievement.”

“We really wanted to win this one at home, so we were inspired with our strong start; the team combined for 395 and we were just one off the pace from Border,” Coetzee said.

Having opened up a healthy lead on the first round pace-setters, the young team kept it together for the final 18 holes, fending off a late charge from Border. Coetzee fired 72. Botha 74 and Heo 79, while Theron and Fourie returned respective rounds of 80 and 82. The sixth member of the team, Lisa Coetzer, registered a non-counting 90.

“When we first arrived for our practice round, a lot of juniors got a bit of a fright when they saw how long the course was, but at the end of the day all the players have to play the same course,” said Coetzee.

“With five out of six scores to count in this format, there isn’t much room for error, so we just made sure that the guys played to their potential on the course and tried to make the whole event a fun environment.

“Everyone on the team made a contribution this week and it is truly a team celebration.” 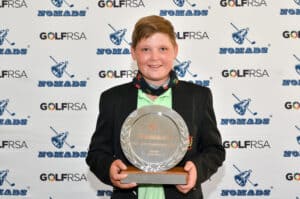 Ekurhuleni junior Juan Coetzee made it a double celebration for Ekurhuleni when he lifted the Individual Competition title with wire-to-wire victory in the 2021 Nomads SA U-13 Championship at ERPM Golf Club; credit Ernest Blignault.

It was a particularly proud moment for the team and the manager and proud father, when Juan Coetzee made it an Ekurhuleni double with a dominant performance in the Individual Competition.

The 12-year-old from Serengeti Golf & Wildlife Estate fired the lowest round of the day in each of the three rounds – 72, 70 and 72 – to complete a wire-to-wire victory on two-under 214. Coetzee was also the only junior to finish the championship under par.

Gauteng North’s Liam Thompson (13-over) and Booye Walters from Western Province (17-over) rounded out the top 10.