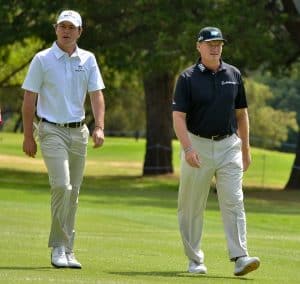 Spurred on by playing partner and uncle Ernie Els, reigning Amateur champion Jovan Rebula tightened his grip on the Freddie Tait Cup challenge on moving day in the 2019 SA Open, hosted by the City of Johannesburg, at Randpark Golf Club; credit Ernest Blignault.

JOHANNESBURG, 8 December 2018 – Spurred on by his famous playing partner, George amateur Jovan Rebula tightened his grip on the Freddie Tait Cup challenge in Saturday’s third round of the South African Open Championship, hosted by the City of Johannesburg, at Randpark Golf Club.

Teeing off in the same group as his four-time Major winning uncle Ernie Els on the Firethorn Course, the pair spurred each other on in their first appearance together in a professional event. Rebula carded a one-under-par 70 to lead the four-man amateur battle by three shots on six-under 207.

The 2018 Amateur champion will start the final push for glory two shots behind Els and is eight strokes adrift of 2010 Open champion Louis Oosthuizen, who fired a 67 to open up a three shot lead on 14-under 199.

“It was really very, very special to play with Jovan,” said five-time SA Open winner Els, who beat his nephew’s score by two shots to tie for fifth on eight-under. “He is still a youngster and it will take a while for it to settle in with him, but this was a very special day for me.”

Els said they dovetailed well and posted a best-ball score of 62.

“I birdied the first and Jovan birdied the second and the third. I got the fourth and he got the fifth, so I mean, we made a lot of birdies out there,” said Els. “I was impressed with him. He kept it together really well through a tough stretch and he finished strong.

“It was great to see my sister Carina out there watching with my dad, and his father Dragan on the bag. They must be such proud parents. Jovan showed a lot of talent as a youngster and I was hoping he would be really good. He is definitely good; he is going to be a great pro. I hope he breaks every record I ever set.”

Rebula rallied with a trio of birdies after a bogey start.

“I made two really good putts, 15 to 20 feet, at the second and third to get the confidence going and I just missed a birdie at four,” said the 21-year-old Auburn University senior.

“I got another one in the hole on five and then it kind of went quiet. I had some good looks, but the birdies didn’t drop. The stretch from 10 to 13 is really tough into the wind, which showed up in force today. I bogeyed 10 and 11, but made a really good birdie putt on 12, the par five.

“It was a big momentum putt for me and got me back to under par for the day. I just tried to keep it in play for the next couple of holes and made a really good birdie on 17. I hit a 7-iron from 205 metres to eight feet and holed the putt. It was another big putt for me.

“I had a good look at 18, but just missed. I’m pleased with round and hopefully I can eliminate the mistakes in the final round and put together another solid performance.” 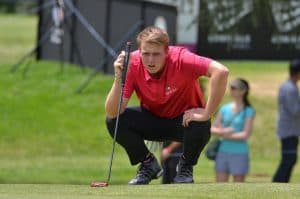 Deon Germishuys in action during round 3 of the 2019 SA Open, hosted by the City of Johannesburg, at Randpark Golf Club; credit Ernest Blignault

It took Rebula three tries to throw his name in the hat for the Freddie Tait Cup, but fellow GolfRSA National Squad players Deon Germishuys, Wilco Nienaber and Yurav Premlall all made the weekend on their first try.

Reigning Sanlam SA Amateur champion Germishuys bogeyed 10 and 13, but turned one-under after a birdie at 18. The Ernie Els and Fancourt Foundation member birdied four and six for a 70, which will see him start the final round in a tie for 41st on four-under.

The Strand golfer is two shots clear of Premlall and the country’s top ranked Nienaber.

“I was playing well on my front nine and made birdies at 12 and 14, but I gave shots back at 16 and 18 to turn level,” said Premlall, the youngest amateur to start in and make the cut in SA Open history at the age of 15 years and five months. 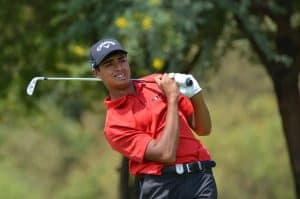 Yurav Premlall in action during round 3 of the 2019 SA Open, hosted by the City of Johannesburg, at Randpark Golf Club; credit Ernest Blignault

“I birdied two and four to get to four-under, but was back to level with bogeys at five and six. The wind was off the left at seven and I went with the 3-wood. I wasn’t hitting it well on the driving range and it was a bad decision. My tee shot went out right and ended up in the hazard.

“At eight, I just didn’t have any confidence after the drop and hit it in the hazard again and I had to up-and-down for a double. On the ninth, I hit a really good pitch shot and caught the slope. The ball rolled over the back, but I chipped it in for birdie. It was great to end the round on a positive note and I’m still in red numbers, so I just need to keep my head in the game in the final round.” 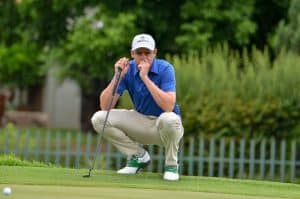 Wilco Nienaber in action during round 3 of the 2019 SA Open, hosted by the City of Johannesburg, at Randpark Golf Club; credit Ernest Blignault

Niebaber was two-under through nine, but had an upsetting start to his back nine.

The 18-year-old – who booms his drives an average of 320 metres – was badly shaken after he hit a spectator on the 10th hole, and struggled to regain his composure. He came home in 40 for a 74 to tie for 55th with Premlall on one-under.

“It really upset me,” said the Bloemfontein golfer. “I’ve seen it happen to other guys, but it knocked me for a six when it happened to me. I struggled to steady myself and find my rhythm and confidence. Made a nice birdie at 16, but messed up at 16 with a double and bogeyed 18.

“I was glad the round was over, but I will come out fighting on Sunday. The battle is only over when the final putt drops.”