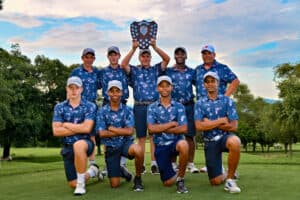 Eastern Province celebrated an unbeaten week at Mbombela Golf Club with promotion to the A-Section in the 2022 South African U-19 Inter-Provincial; credit GolfRSA.

18 December 2022 – Eastern Province stormed to victory in the B-Section of the South African Under-19 Inter-Provincial Tournament at Mbombela Golf Club, winning seven out of seven matches to secure promotion to the A-Section.

To make the victory even sweeter, EP’s Jean Upman and Devon Valentine shared the Most Valuable Player award on 9.5 points with Ekurhuleni pair Marno Lange and Reinhardt Uys, and Border’s Ryan Koekemoer. Both Valentine and Upman won all six of their singles matches.

With no fewer than four South African Golf Development Board players in the team, EP dominated all before them, with

Jon William Hobson finished in sixth place on the MVP list with 9 points, while Charles Rose-Innes tied for eighth with Johndre Ludick – one of four South African Golf Development Board players in the team and a 2022 inductee of the GolfRSA National Squad – on 8 points.

Well rested after an entertaining trip to the Kruger National Park on their day off, they returned on day three with no sign of letting up and comfortably beat Ekurhuleni 8 – 4. Valentine saved his best golf for the singles, as the youngster from Wedgewood fired seven birdies and no bogeys to beat Uys 4 & 2.

Two more decisive victories against Limpopo (8 – 4) and neighbours Border ((7 – 5)) on day four meant that EP had wrapped up the title with a day to spare, but the team stayed on track to beat Mpumalanga 7.5 – 4.5 on the final day.

Trailing 2.5 to 1.5 after the foursomes, EP fell further behind when Schalk Grobbelaar beat Jon Hobson 4&3. 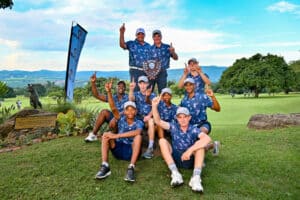 Elephants mow down opposition at Mbombela

However, the men from the Eastern Cape bounced back as Othimna Matiwane and Charles Rose-Innes both won their final holes to beat Ivhan Erasmus and tie with Jason Cloete respectively.

“We came with high expectations,” he said. “We knew we had a strong team and were well prepared and we had one goal, which was to win the tournament. Now that it’s happened, I don’t think it has really sunk in yet, but we are all so happy that we could pull it off.”

Team manager Gerhard Hills sung the praises of his charges, saying that it was well and truly a team effort.

“The guys played great golf this week,” he said. “Every single player managed to contribute to the success of the team this week. I want to complement each of my players – you guys are all superstars and have really done me, our union and your families and coaches proud.

“We would like to applaud GolfRSA on hosting a fantastic event and Mbombela Golf Club for rolling out the red carpet. The course was absolutely pristine, and Darren Plumb and his team went out of their way to ensure that our every need was met. A very big thank you to all of you for a very memorable week.”