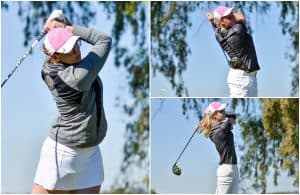 22 May 2018 – Ekurhuleni will start the final day of the SA Women’s 72-Hole Teams Championship with a two shot lead, but Free State and Boland are determined to chase down the Challenge Trophy leaders at Waterkloof Golf Club.

Boland B took the first round honours with a score of 158. Ekurhuleni’s B-team was two off the pace, with Free State a further three shots adrift in fifth place.

Free State chased down the overnight leaders and headed into the third round with a two stroke lead over Ekurhuleni, but the team was overhauled by Ekurhuleni, who posted back-to-back rounds of nine-over 153 to take pole position on 34 over.

Free State and Boland B ended the day two shots back in a tie for second.

Kiera Floyd shot 73 and Teagan Lubbe carded 80 to move Ekurhuleni within two shots of Free State in round two. A 76 from Alisa Rich and 77 from Floyd in the third round saw Ekurhuleni rise to the top of the pile.

“We had to work really hard to get past Free State and we only have a two shot lead, so we won’t take anything for granted,” said 13-year-old Floyd.

“Free State played incredibly well to come up from fifth place, so we will to protect our lead to finish on top. We are a tight team with a fantastic spirit and we play for each other and I believe that if we keep on track, we can pull it through.” 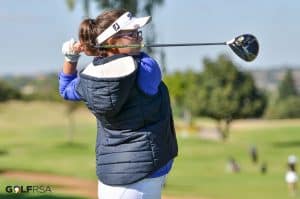 Chante van Zyl and Pheletso Mota returned respective rounds of 73 and 75 for a total of 148 that gave Free State the second round lead. Gabbi Venter posted a non-counting 76. Van Zyl anchored the team again in round three, carding 76, Mota posted an 81 and Venter a non-counting 82.

“All three of us struggled on the greens in the afternoon and we couldn’t keep the momentum,” said Oppenheimer Park golfer Van Zyl, who will be heading to the United States in August to take up a golf scholarship at Wayland Baptist University in Texas.

“We’re not struggling from tee to green, but the greens have us baffled. They are extremely slick and incredibly difficult to read. I made five birdies in the second round, but I gave eight shots back, including two doubles for a 71. In the afternoon, they speeded up even more and we all struggled to get the putts in the hole.” 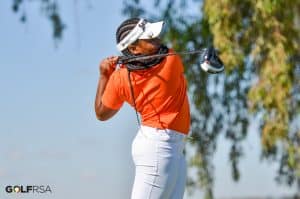 Mota, a member of Women’s Golf South Africa’s Talent Development Squad (TID), was extremely pleased to contribute and lay to rest her worries ahead of the tournament.

“I had back injuries twice in the last three years and I missed a lot of golf, so I did worry that I wouldn’t play well enough to help the team,” said the 16-year-old from Kroonstad.

“I played really well and didn’t make many mistakes, but the greens bit me over and over. I made three birdies in the morning, so hopefully a few more putts drop Wednesday morning so we can take the Challenge Trophy back to Free State.” 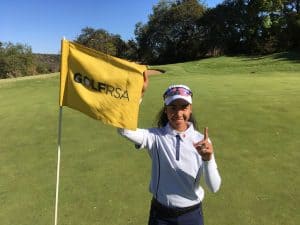 Gauteng North’s Shanice de Gee also had reason to celebrate. The Woodhill golfer recorded her first hole-in-one when she aced the par three 15th, wielding a 7-iron, in the second round.