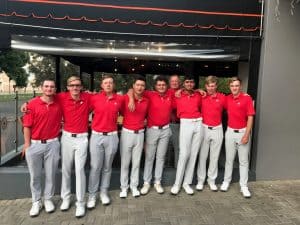 Defending champions Ekurhuleni picked up where they left off in East London last year with two convincing victories in the opening round of the SA Under-19 Inter-Provincial at Benoni Country Club; credit GolfRSA.

BENONI, 17 December 2018 – A year ago Ekurhuleni showed up the traditional powerhouses of the South African Under-19 Inter-Provincial – Central Gauteng and Western Province – to win the premier junior golf team championship title for the first time in nearly 30 years.

On Monday, the defending champions picked up where they left off in East London and threw down the gauntlet with two convincing victories at Benoni Country Club.

The host union stretched a 2.5 – 1.5 lead in the Foursomes to beat Western Province 8 – 4 and routed KwaZulu-Natal 7 – 5. The young side showed serious determination against the coastal side after the two teams squared the morning session.

Kyle Kistensamy, Ryan Welsh and Nathan Trodd rallied to put KwaZulu-Natal 5 – 4 ahead, but Ryan van Velzen won 4 & 3 and Yurav Premlall won 3 & 2 to regain the advantage for Ekurhuleni. Benji Stein sealed the second win when he defeated Louis Barnard 1-up in a tightly contested battle.

The 2015 champions gained the early advantage in the Foursomes over both their opponents. The Garden Route side mowed down Gauteng North to win 8 – 4 and powered to an 8.5 – 3.5 victory over Central Gauteng.

The Lions routed Gauteng North 10 – 2 to bank 1 point on the opening day.

North West, who won the promotion battle at East London Golf Club, had a first round bye, but they team will wet their feet when they tackle Gauteng North and Ekurhuleni in round two. The host union will face the Daisies, while Central Gauteng and KwaZulu-Natal face off in the final match.

Border made a magnificent start to the promotion battle at Benoni Country Club, bagging four points for victories over Mpumalanga and Limpopo.

Having scored a clean sweep against Mpumalanga, Qhamani Tande claimed the first scalp for Border when he downed Revashen Naidoo 6 & 5. Cameron Renton, Jaden Joubert and Logan Roos reeled in three points to ensure an 8 – 4 result.

The match against Limpopo was tighter, with Border taking a 2.5 – 1.5 lead into the Foursomes.

Qhamani, Renton, Joubert and Roos once again stepped it up to guarantee the maximum 4 points for Border with a 7.5 – 4.5 win.

Border will be gunning for more glory against Free State on Tuesday, while Northern Cape start the 2018 promotion battle in a three-way match against Limpopo and Boland.