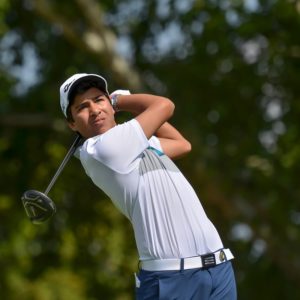 11 December 2017 – Central Gauteng and Western Province are the traditional powerhouses in the junior team championship, but Ekurhuleni made a huge stand on the first day of this year’s South African Under-19 Inter-Provincial in Buffalo City.

Ekurhuleni trailed Central Gauteng and Southern Cape 3 – 1 after the Foursomes, but the young side showed some serious determination to bounce back at East London Golf Club on Monday.

Thirteen-year-old Nash de Klerk and partner Warwick Purchase managed to gain the two points for Ekurhuleni in the Foursomes and the pair continued their winning ways in the Singles.

The defending champions did salvage one point with a 6-all draw against Southern Cape.

Meanwhile Western Province made an equally impressive start. KwaZulu-Natal had the upper-hand in the Foursomes, but Idrees Saban, Hilmi Mallick, Ian Botha, Sam Simpson, Deon Germishuys and Luca Filippi overturned a 1.5 – 2.5 deficit to deliver a 7.5 – 4.5 result.

Western Province led Gauteng North 3 – 1 in the Foursomes. The juniors racked up five victories in the Singles and halves from Mallick and Ayden Senger helped to hand the Daisies a 9.5 – 2.5 drubbing.

The final match between the Daisies and KwaZulu-Natal also ended in a draw.

Last year’s B-Division winners Boland enjoyed a first round bye and will face Western Province and Central Gauteng in round two.

North West made a magnificent start to their B-Division campaign with convincing victories against Limpopo and Free State.

Having scored a clean sweep against both teams in the Foursomes, North West kept their foot on the pedal to route Limpopo 9.5 – 2.5 and mow down Free State 10 – 2.

Local favourites Border gave the home crowd something to cheer about with victories over Eastern Province and Mpumalanga.

Border and Mpumalanga were 2-all after the Foursomes, but Logan Roos, Jaden Joubert, Benjamin Brent, Tristan Naude and Daniel van Seumeren stepped it up in the Single to deliver a 7 – 5 result. The team trailed Eastern Province 1.5 – 2.5 heading into the Singles, but once again, used their local knowledge well to edge out Eastern Province 6.5 – 5.5 with victories from Roos, Joubert, Brent, Osner and Van Seumeren.

In the remaining matches, Limpopo mowed down Free State 7 – 5 and Eastern Province routed Mpumalanga by the same margin.

Northern Cape sat out the first round, but will join the action on day two with matches scheduled against Border and Free State.