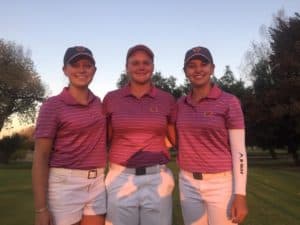 4 June 2019 – Ekurhuleni A overhauled first round leaders Gauteng A on moving day for the Swiss Team Trophy lead at Maccauvlei Golf Club, while Mpumalanga B pulled away from the opposition in the Challenge Trophy at the 2019 SA Women’s 72-Hole Teams Championship on Tuesday.

Macnab and Van der Westhuizen combined for 149 in the morning session and the pair pooled for 147 in the afternoon. The 2018 runners-up will head into the final round with a slender two shot lead over Gauteng A.

Larissa du Preez and Gina da Silva posted the only sub-par total in round one and the pair followed their opening 143 with rounds of 154 and 146. The defending champions are within striking distance, but successive victories will not only require catching the leaders, but also keeping a charging Gauteng A at bay.

Kajal Mistry, Zethu Myeki and Symone Henriques opened with an unexceptional 153, but the trio caught fire on day two, producing a second round 145 and third round 145 to finish hot on the heels of Gauteng North A.

Meanwhile Danielle Bekker and Nicole Schoeman kept Mpumalanga B in the pounds seats in the battle for promotion.

The pair took the lead with a first round 158 and opened up a commanding lead on 472 with rounds of 155 and 158. Mpumalanga B will start their final push for Challenge Trophy glory 12 shots ahead of Western Province B and 15 shots clear of KwaZulu-Natal B.

Nina Grey, Bobbi Brown and Isabella van Rooyen kept Western Province B in the running with rounds of 161 and 158, while Kim Strauss, Marlie Smit and Jess Shurety from KwaZulu-Natal B stayed in touch with successive rounds of 163.

Macnab also broke away from joint first-round leader Du Preez to take the lead on lead in the Individual Competition on one-under. Successive rounds of 72 will see the Serengeti golfer start the final 18 holes with a four shot lead.

“We are all feeling good for tomorrow,” Macnab said. “We came very close last year, so we know in this format things can change quickly. We’ll just play for each other and individually try to put to best score on the board for the team. Our goal is to play the final round level or better and we think that will secure the win for us.

“Unfortunately our B-team had a battling day and slipped to last in the standings. We are going to give them a pep-talk to lift their spirits so they can go into the final round with positive vibes.

“On a personal level, I was not at my best today, to be honest. The course is playing quite tough and there were some tricky pins to negotiate. I missed a lot of greens or missed on the low side, short-siding myself a lot with some really tough chips.

“My putting was pretty good, though. I sunk some clutch putts for pars and made good birdies. My personal best holes were both in the second round. I hit the 15th green in two and drained a 12 metre putt for eagle and I nearly eagled the 18th, as well.

“I had 214 metres flag and I hit a 3-wood in, leaving myself with a two metre putt. It just burned the edge but I made the birdie putt to get back to level after a bogey at 16. I started the third round bogey, bogey, but birdied four and nine and cancelled a double at 12 with birdies at 14 and 15.”