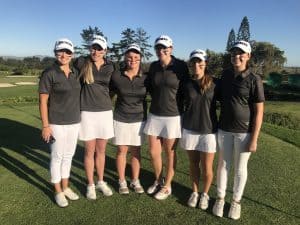 Ekurhuleni got off to a winning start on day one of the 58th SA Women’s Inter-Provincial Championship with a 6.5 – 2.5 victory over Gauteng at Devonvale Golf and Wine Estate; credit GolfRSA.

STELLENBOSCH, 3 October 2018 – Western Province mowed down Southern Cape on day one to strengthen their bid for successive victories, but Ekurhuleni showed some serious spunk to match the defending champions with a winning start in the 58th South African Women’s Inter-Provincial Championship at Devonvale Golf and Wine Estate on Wednesday.

Western Province capitalized on gentle conditions in the morning to beat score a clean sweep in the Foursomes. Zayb Fredericks, Kelly Erasmus, captain Kaylah Williams and Vicki Traut racked up 4 points to guarantee a 7 – 2 result for the defending champions.

Ekurhuleni had more work to do against former champions Gauteng after the two teams drew 1.5-all in the foursomes.

Western Province and Ekurhuleni both gained 2 points, but the 2017 winners moved into the top spot in the log with a half point games advantage.

Local favourites Boland redeemed themselves after finishing in the bottom draw after the Seeding Round by routing Gauteng North 6.5 – 2.5.

Mpumalanga and Border both made a superb start to the promotion battle.

Mpumalanga’s Petrone Rudolph and Nicola Schoeman won 5 & 3 and Chante Boonstra and captain Patrizia Lombard combined for a 4 & 3 to take a 2 – 1 lead over Western Province B into the foursomes. Lombard halved against Kayla Paulsen, but Boonstra, Rudolph and Schoeman cleaned up in the singles to deliver a 5.5 – 0.5 result.

Border defeated Free State 5 – 1. Demi Flanagan and Luzan Esterhuizen 2 & 1 and seasoned veteran Millie Zim-Dondashe boxed an 18-foot putt for birdie at the last to make it two-for-two in the foursomes. Flanagan took the first scalp in the singles with a 4 & 3 win against Mariane Payne. Pieterse won 2Up and Esterhuizen 3 & 2, but the captain bowed out 7 & 5 to Free State number one Gabbi Venter.

B-SECTION – DIVISION 2
Eastern Province and Northern Cape came up trumps in their first round clashes.

Having beaten Limpopo 2 – 0 in the foursomes, Cherilee Knoetze and Zahn Scholtz delivered the winning blows for Eastern Province to secure a 4 – 2 victory.

Northern Cape halved their foursomes against North West, but Elmien van Niekerk, Mikah Poonawassy and Magri Beukes reeled in 3 points to give Northern Cape a 3.5 – 2.5 start in the championship.