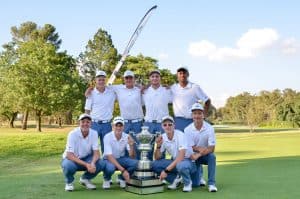 Ekurhuleni celebrated back-to-back victories with an unbeaten performance in the 2018 SA Under-19 Inter-Provincial at Benoni Country Club; credit Ernest Blignault.

BENONI, 21 December 2018 – It took them nearly 30 years to break a winning drought in the South African Under-19 Inter-Provincial and Ekurhuleni wasn’t about to give the trophy back this year, especially not in their own back yard.

While the usual mix of upsets and jostling for position went on around them, the 2017 champions remained resolute in their mission at Benoni Country Club.

Ekurhuleni launched their title defence with convincing victories over KwaZulu-Natal and Western Province on day one. They kept their foot on the pedal and North West, Gauteng North and Southern Cape fell next. On Friday, the eight-man side defeated Central Gauteng to celebrate back-to-back victories with an unbeaten performance.

“I asked the boys to give me everything they had left and they delivered in terrific style,” said delighted manager Jack Turton.

Ekurhuleni led the foursomes 2.5 – 1.5 and wins from South Africa’s top ranked Jayden Schaper, Yurav Premlall, Warwick Purchase and Saul Moss in the singles put the team in the driver’s seat against Central Gauteng.

“We won the match against Central 8 – 4 to keep the trophy at home,” said Turton.

“Last year was incredibly special, because the last time we won a Junior IPT was in 1988 when we were still the Eastern Transvaal Golf Union.  Winning in East London lit a fire in their belly. They were absolutely determined to defend the title.

“This year was even more special. These boys have played together for years now. Some might say it was the home course advantage, but I believe it was the team spirit that took as back to the winner’s circle. They truly play for each other and for the team.”

Schaper shared the Most Valuable Player’s honour with fellow Junior Presidents Cup team-mate Christo Lamprecht from Southern Cape on 11 points and Purchase was third with 10.5 points.

“Jayden, Warwick, Yurav and Ryan all finished in the top 10, and the rest of the team finished inside the top 22,” Turton said. “I think that says everything about this team’s talent and will to succeed.

“I use a Ryder Cup management style and it works for us. I don’t believe in number ones and number eights. Take Benji Stein, who joined the team this year. Benji was really nervous at the start, so I put him in at eight. His halves in the foursomes and singles against KwaZulu-Natal on day one was crucial to our winning that match. He blossomed from that point forward.

“I have to thank Rob van Velzen, our technical advisor, for his great work this week. It was fantastic to have a second pair of hands and eyes on the course and he did an excellent job in advising the boys from a course and technical perspective.

“I am incredibly proud of the team’s achievement and even prouder of the way they conducted themselves on and off the course. Their etiquette, sportsmanship and manners were exemplary and they truly are great ambassadors for Ekurhuleni Golf Union and GolfRSA.

Burnand attributed the team’s spirit and winning attitude to Turton.

“Uncle Jack does an incredible job to keep us motivated and keep our spirits high with his motivational quotes and messages,” said Burnand.

“He told us that you only have three choices: give up, give in or give it your best shot. He also said it’s no use having a goal without a plan. Most importantly he warns us to stay patient and calm. It’s great to have his constant support to keep us in a positive mind-set.

“We were also really grateful to all the supporters who came out to encourage us, especially the fans who cheered us on to the finish line. And to the Ekurhuleni Golf Union, a huge thank you for their belief in us and the support and opportunities they give us to further our careers.”

Southern Cape had a chance to challenge for the title, but needed to win against Western Province and win big to make up the game points deficit. The Garden Route side defeated Province 7 – 5, but had to settle for second place.

Gauteng North won the final match 7 – 5 to keep their spot in the top draw, leaving KwaZulu-Natal holding the wooden spoon.