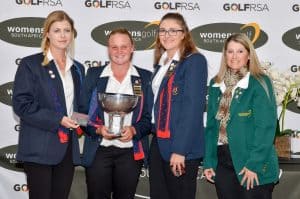 23 May 2018 – The A-team might have come up short in the SA Women’s 72-Hole Championship, but Kiera Floyd, Teagan Lubbe and Alisa Rich gave Ekurhuleni plenty reason to celebrate when the trio combined for a four shot victory in the Challenge Trophy on Wednesday.

And the conquest at Waterkloof Golf Club also comes with a coveted promotion to the Swiss Team Trophy in 2019.

The B-team posted rounds of 160, 153 and 153 to start the final round with a two shot lead over Boland B and Free State.

Thirteen-year-old Floyd made sure her team retained pole position when she birdied two of the last three holes for an even-par 72.

Caitlyn Macnab, who anchored Ekurhuleni A, shared first with Danielle du Toit from Gauteng North on three-over 291, while Floyd and Casandra Hall from the A-team tied for fifth on 297. Sarah Bouch, also from Ekurhuleni A, tied for eighth on 300.