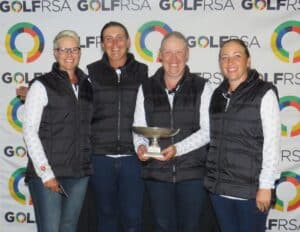 7  May 2022 – Ekurhuleni will make their debut in the A-Section in the 2023 SA Women’s Mid-Amateur Inter-Provincial after claiming a hard-fought victory in a tightly contested promotion battle in the inaugural edition played at Parys Golf & Country Estate in May.

“It went down right to the wire,” said Ekurhuleni captain Candice Wort after her team were crowned the 2022 champions in a count-out with the host union Free State and Limpopo.

“We all tied on 6 points, but we had done the hard work earlier in the week to secure the win on games points. There were no heroes this week, just a team of four ladies who played for each other and for our union and we are overjoyed at being crowned the first B-Section champions. We really wanted this, and we worked extremely hard to get there.”

Ekurhuleni staked an early claim in the promotion battle with an opening 4.5 – 1.5 win over Border and kept themselves in the driver’s seat with further wins against Mpumalanga (5.5 – 0.5) and Free State 4 – 2.

The Roses began the final round on 6 points and with a 3-point cushion over Mpumalanga and Border, who had a win, a draw and a loss each.

Limpopo, Free State and Eastern Province, having drawn two matches and with a loss each, rounded out the log on 2 points.

“In our final round three-way we faced Limpopo and Eastern Province, and the matches were extremely closely contested,” said Ekurhuleni captain Candice Wort. “We drew the foursomes against Eastern Province, but we lost to Limpopo and we knew we would have to dig really deep in the singles.”

Chantelle Davis lost 7 & 6 to Limpopo’s Desi Earle and Liezel Heyns went down 7 & 5 to Luzaan Combrink, but the captain routed Hendriette Liebenberg 7 & 5 and Rika Gerber, in the final game, claimed another vital games point with her 8 & 6 victory over Nola Peceur. 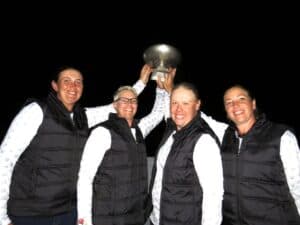 In the match against Eastern Province, Wort once again stepped it up to win 7 & 6.

Davis lost 7 & 6 to Janine van der Merwe, Heather Kruger beat Heyns 8 & 6, but Gerber dug in her heels and managed to halve her game against Lynne Slogrove.

However, Ekurhuleni claimed victory by edging Free State by 2 games points and finished 2.5 games ahead of third-placed Limpopo.

“Despite losing both matches on the final day, we collected 4.5 games points to boost our tally to 18.5 and in the end, those points proved critical to get us into the winner’s circle,” said Wort.

“The SA Women’s Mid-Am IPT had been a long time in the making and if the first edition is anything to go by, this tournament is going to go from strength to strength. I can see this event becoming extremely popular and the ladies will definitely fight for places on the teams going forward.

“A big shout-out to my team-mates for an incredible week and amazing memories, and a big thank you to GolfRSA, Womens Golf South Africa and the fantastic people at Parys Golf & Country Estate for putting together a very memorable event.”