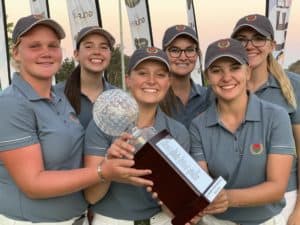 29 September 2019 – Twelve months after they marched to a historic first victory in Stellenbosch, Ekurhuleni was in ascendancy again in the 59th South African Women’s Inter-Provincial Championship at Riviera on Vaal Country Club.

The defending champions put an exclamation mark behind an unbeaten week when they staved off a spirited assault from Western Province in a closely contested final round to claim the union’s second successive victory in the prestigious annual team event on 27 September.

“The team performed from the word go, winning the seeding round and delivering in every match to defend the title,” said Ekurhuleni captain Caitlyn Macnab.

“We demanded perfection from each other and everyone stood up to be counted. Winning all our matches for two successive years says everything about the players on this team. We might be a young team, but our determination to succeed was unmatched and that’s why took the cup home again.”

Ekurhuleni made a strong case for their title defence with a 23-shot victory over Western Province in the 36-hole seeding round.

After a clean sweep in the foursomes, the 2018 champions racked up four points in the singles to beat Boland 7 – 2 in the match play opener. A 6.5 – 2.5 result set up a highly anticipated final round clash with 2017 champions Western Province, who downed Gauteng 5 – 4 in the first round and knocked out Boland 7 – 2 in the second.

“We trailed Western Province 2 – 1 after the foursomes and the girls were feeling a little bit nervous, but I gave them some positive thoughts. We all knew the score and what needed to be done,” said Macnab, who won their sole point with a 3 & 1 win partnering Nadia van der Westhuizen.

Then Kyra van Kan turned the tide in Ekurhuleni’s favour when she halved against Nina Grey and showing the same fighting spirit that carried them to the winner’s circle at Devonvale Golf and Wine Estate last year, the rest of the Ekurhuleni team took the attack to Western Province.

“It was like a replay of last year’s final,” Macnab said. “I managed to go 1-up on seven and I was 3-up through 15, but then Kaylah hit back and won the 16th and 17th holes. We were coming off the 17th green when the team arrived to tell me they had done it. That took some pressure off.”

The country’s top ranked amateur lagged her first putt inches from the hole, putting pressure on Williams to convert her birdie putt to square the game. She missed the opportunity and Macnab’s 1-up win for a 5.5 – 3.5 victory over Western Province put the seal on an unbeaten week.

“I am extremely proud of the team,” Macnab said. “After the foursomes I told them that I didn’t care what the result was as long as they walked off knowing they gave it 200% and they delivered.

“We all made a rough start and trailed through the first nine holes, but as soon as we turned, things flipped into our favour. I couldn’t be more proud of their fighting spirit and their determination.

“It’s such an honour to captain this side. Strategically I think we did really well setting up our pairings and we executed really well in our singles. This was absolutely a team effort.

“We are very proud to the part of the success of Ekurhuleni. For the first time in history, our small union owns three inter-provincial titles at the same time. Our juniors also defended successfully in December last year and earlier this month, our premier team won the SA Inter-Provincial. We are a small union, but like a big family and everyone will share in this success.”

Ekurhuleni topped the A-Section standings with 6 points, Western Province was second on 4 points, Gauteng third on 2 and Boland fourth in the top order.

Meanwhile last year’s B-Section champions Mpumalanga led the standings in the bottom order with 6 points after also celebrating an unbeaten week in Vereenging.

Gauteng North and Southern Cape both won one match, but the Daisies edged the Garden Route side for second place by half a game point (12 – 11.5), while 2016 champions KwaZulu-Natal finished in the last spot.