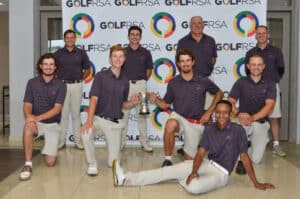 Eastern Province celebrates the reward of an unbeaten week at San Lameer Country Club as the B-Section winners of the 60th SA Inter-Provincial Tournament; credit GolfRSA.

17 September 2021 – Eastern Province will make a return to the A-Section of the SA Inter-Provincial Tournament for the first time in seven years after the young team romped to victory in the B-Section of the 60th edition at San Lameer Country Club.

Led by 24-year-old captain Altin van der Merwe, the Eastern Province team that included no fewer than four rookies ended the week with a perfect record of five wins from five amid rain and wind on the KwaZulu-Natal South Coast.

“It’s the youngest IPT we have ever assembled, with five up-and-coming youngsters, four of who were rookies,” said a delighted team manager Sieg Human.

“We were confident, though that we had a good chance of winning coming to San Lameer because we had an experienced core of strong players in Altin, Kyle (de Beer), Dillon (Germshuys) and Pieter Zietsman.”

The final two days of play brought about some testing conditions as sweeping rain and high wind played havoc with golfers’ scores.

Eastern Province entered the final day needing to beat Mpumalanga to win the promotion battle for the first time since 2014. After winning the foursomes matches 3-1, they knew they were almost home. A few hours later, they had won six eight singles matches and the celebrations could begin.

“I really hope we can keep this team together,” said Human. “It’s a great group of guys and I think they can hold their own in the A-Section.”

GolfRSA National Squad member Kyle de Beer and fellow Ernie Els and Fancourt Foundation player Van der Merwe led from the front. Van der Merwe scored a perfect 10 and De Beer 9.5 points – helped by the fact that they paired together to win all five of their foursomes matches – to bank first and second respectively in the B-Section’s Most Valued Player ranking. 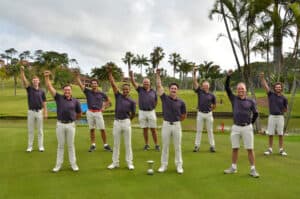 Eastern Province celebrates the reward of an unbeaten week at San Lameer Country Club as the B-Section winners of the 60th SA Inter-Provincial Tournament; credit GolfRSA.

“We did our bit, but the juniors really came through,” said skipped Van der Merwe. “At the end of the day it is not about who you are playing, but about getting that point. Of course, it helps that Kyle, Dillon, Pieter and I have been here before, but we know that in match play anyone can beat anyone else. Our rookies were brilliant this week.”

“I put him with me in the singles in round four, and he really hit the ball beautifully. I am so impressed with him. He drives the ball well and he putts beautifully. He made a lot of crucial par-saves when his opponents hit it close on the last three days, and he is definitely someone to watch out for in the future,” he said.