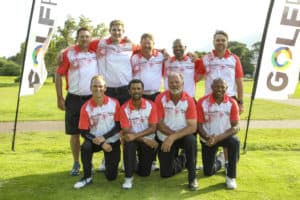 12 October 2019 – Eastern Province not only won the promotion battle in the 14th South African Mid-Amateur Inter-Provincial, but they did it in style – lifting the B-Section title with one round to spare and capping an unbeaten performance with a final round triumph at King David Mowbray Golf Club on Friday.

“We didn’t lose a match in the entire tournament and our goal was to go home with an unbeaten record,” said team manager Joe Matiwane. “The guys were determined to finish the job in our final match against Mpumalanga before the corks would pop.”

The 2019 champions won three of their foursomes games and halved the other to take a 3.5 – 0.5 lead into the afternoon session.

Rhalf Manual, playing at number eight, handed Carel Jacobsz a 7 & 6 drubbing, and Dillon Germshuys, Hugo Maritz and Francois van Coppenhagen did the rest of the damage to secure an 8 – 4 victory for Eastern Province.

“We came, we saw and we conquered,” Matiwane said. “Over the last six or so years, we have won promotion three times, just to go down the next year. We came here with a goal and achieved it, but now the real work starts.

“Our results this week is proof positive of the amazing spirit in the camp and our players’ commitment to perform for each other. The A-Section is tough. There aren’t any easy matches, but we belong in the top draw and we are going to prove it next year.

“Congratulations to every player on pulling through this amazing result and congratulations to Ryno Ferreira for captaining this team to victory. Your ability to boost the moral in the camp and to rally the players played a huge role in our victory.”

The skipper was especially proud of the fact that Eastern Province took the top three spots in the Most Valuable Player standings.

“We are just eight guys who leave nothing out there and who play for each other and our union with everything we’ve got. We don’t have stars, but I do want to mention three guys who really punched well above their weight this week,” Ferreira said.

“Dillon has not been feeling well and this morning he was feeling so poorly that we considered putting Joe in the team. But Dillon went out there like a champion and beat Louis Odendaal 5 & 4 to score a full house and win the top spot in the MVP standings with 12 points. That hasn’t been done since our former star player Mzuyanda Zingela won the full 14 points on offer in East London in 2015.

“Rhalf Manuel is our secret weapon at number eight and once again he killed it, picking up 11 points to finish second on the MVP list. Hugo Maritz was another standout this week, scoring 10.5 points to share third with Beyers Smith from North West.

“We set our combinations early on and it added to the sense of continuity this week. We dominated the foursomes and had an early edge in almost every match. The rest was up to the guys and they all put their hands up this week. As much as golf is an individual game, our team spirit was phenomenal and it played massive role in our success.”

Boland defeated Limpopo 8.5 – 3.5 to seal second place in the log, with North West third after a draw with Northern Cape in the final round. Mpumalanga was fourth, Northern Cape fifth and Limpopo finished sixth.