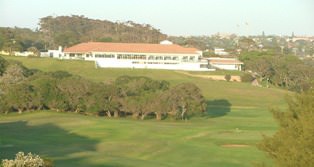 EAST LONDON, 27 February 2010 – With the mass exodus of the country’s top amateurs to the paid ranks over the last two years, East London Golf Club offers a new wave of golfers a great opportunity to stake a claim for the country’s most prestigious amateur honour at the Glacier SA Amateur Championship from February 28 to March 5, 2010.

The popular layout confirmed its distinction as a championship venue by hosting eight national Opens since the early 1900s and is home to the Africa Open, co-sanctioned by the European and Sunshine Tours.

Since DG Proudfoot won the sixth of his eight SA Amateur titles at East London Golf Club in 1898, the course has been a regular stop on the South African amateur circuit.

It has been 10 years since a fresh-faced Van Zyl handed Dean Lambert a harsh 8/6 beating for the SA Amateur honour and the reputation of East London Golf Club as a tough and uncompromising challenge is still holding strong.

“From the par-five first until the blind tee shot at the 18th, this is a risk and reward layout that demands strategic planning and control,” said general manager, Brenden Fourie, adding that the amateurs will do well not to be fooled by the low scores recorded in the recent Africa Open.

“The course will actually be in better shape for the amateurs than it was for the Africa Open, because we have had some rain and the rough is thicker. Overall, the fairways and greens are in good shape and the course should play firm and fast. The forecast for the tournament week is windy and that means a premium on accuracy.”

The par-five 18th, especially, is a great finishing hole for a match play championship and should provide plenty of thrills for games going the distance. Throw in some subtle course refinements and the class of 2010 are in for a tough challenge.

The South African Golf Association’s Greg de Doncker is tasked with setting up the course.

“The set-up will be fair; this course is tough enough to deal with when the wind is up and we have wind predicted for the week,” said De Doncker. “Throughout the tournament, we will set the course up to be a fair test of golf, a test that will allow all the players to compete on the level playing field.”

The 144-strong field will contest the 36-hole Stroke Play qualifier on 28 February and 1 March. The top 64 players qualify to challenge for the national title from March 2-5 in Match Play. They will 18 holes on Tuesday and 18 holes in the morning and afternoon of Wednesday and Thursday respectively.

The final will be decided over 36 holes on Friday. This year’s winner will receive a spot into the British Amateur at Muirfield from June 14-19 and will play alongside current South African Open champion Richie Ramsay in the 2010 tournament scheduled for Durban Country Club.