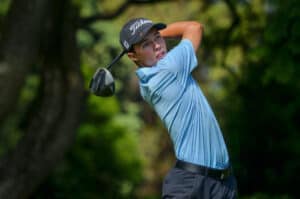 GolfRSA National Squad member Fabrizio scored the biggest scalp in the opening round of the match play stage in the 120th SA Amateur Championship when he defeated GolfRSA No 3 Christiaan Burke to reach the top 32 at Royal Johannesburg & Kensington Golf Club; credit GolfRSA.

8 February 2022 – Some top contenders fell in the marathon first round of the 120th South African Amateur Championship, but the biggest upset on the day was most certainly caused by Mother Nature.

Following two lengthy delays due to dangerous weather conditions, four matches were incomplete after play was called, and the eight hopefuls will have to restart at 06h30 on Wednesday morning.

Meanwhile, among the 64 qualifiers successfully trimmed to 28, top seed Reece Mckain had to battle all the way to the 18th to edge out GolfRSA’s No 1-ranked junior Daniel Bennett.

The newly-minted Proudfoot Trophy winner went up early in the match, 16-year-old 1 Bennett squared the match with a par on the 15th hole. Mckain resumed the lead when the reigning Nomads SA Boys U-17 champion promptly dropped on 16, and he eventually won 1-up when the pair halved the par five 18th.

Defending champion was tested all the way by Kenyan Njoroge Kibugu.

Maas finally bested Kibugu with an eagle at the final hole to win his match. He will face England’s Zachary Chegwidden in the second round – a familiar face, as the Englishman was on the bag of compatriot Jack Dyer when Maas beat him in last year’s 36-hole final.

De Abreu performed the day’s giant-killing act by taking down GolfRSA No 3-ranked Christiaan Burke, who was one of the favourites heading into the competition.

The 15-year-old fired six birdies in his round, and with the match all square going down the last, it was his eagle that provided the killer blow. He faces fellow Woodhill Country Club member Deyzel in the second round, after Deyzel edged Dutchman Bob Guerts on the 19th hole.

Duminy and De Beer face off in another all GolfRSA National Squad match that promises to have plenty of fireworks, while 2020 champion Jarvis will take on De Klerk.

Pascal Gunther, who will make his debut for South Africa in the GolfRSA Junior Protea team at Leopard Creek in the African Amateur Stroke Play Championship, was equally impressive. The 18-year-old Bryanston golfer crossed the first hurdle with a 4 & 3 win over Christiaan Kriek.

And Bernard Meyer, the runner-up in the 36-hole stroke play qualifier, will face Werner Potgieter in the second round after the Southern Cape golfer downed Warren Hoffman 2-up.

There were mixed results for the foreign contingent, with Scot Rory Franssen and Zimbabwe’s Keegan Shutt joining Chegwidden in the next round, while Scotland’s Stephen Roger and Kenyan rising star Adel Balala had their campaigns cut short.

Roger went down 3 & 1 to Ernie Els and Fancourt member Letsoso Letsai from Free State, while Kenya’s Balala lost by the same score to Murad Hoosen, who plays out of Tthe Els Club Copperleaf.

RESULTS FROM ROUND 1 (incomplete)