Central Gauteng celebrates a successful start to their title defence after an opening day win in the South African Inter-Provincial Tournament, sponsored by Tempest, at Mbombela Golf Club; credit GolfRSA.

16 September 2019 – Central Gauteng began their title defence in the South African Inter-Provincial Tournament on a positive note, while Free State and Boland made a big stand in the promotion battle at Mbombela Golf Club on Monday.

It took a strong effort to overcome last year’s B-Section winners Western Province, but the Lions got the job done to join Southern Cape and Gauteng North as the early frontrunners on day one of the premier annual team event, sponsored by Tempest Car Hire.

“At this level there are no easy matches,” said manager Andy Truluck. “Province got promoted last year and we knew they would come at us hard. All the games were pretty tight, but our guys put their hands and kept fighting. There are still a lot of golf to be played, but we are pleased to have crossed the first hurdle.”

Southern Cape and Ekurhuleni were tied 2-all after the morning session, but Jordan Burnand’s 8 & 7 captain’s innings put Ekurhuleni on the attack.

KwaZulu-Natal was only able to gain a single point from number one Greg McKay’s 3 & 2 win against Werner Deyzel as Armand van Dyk, Andrew Williamson, Jacques van Tonder, Nicholas Souranis, Francois van der Walt and Christiaan Maas piled on the points for the Daisies. Stals Swart clinched the win when he squared his game against Jonothan Broomhead. 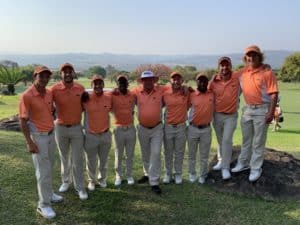 Free State made a roaring start in the promotion battle with an 8.5 – 3.5 victory against Border on day one of the South African Inter-Provincial Tournament, sponsored by Tempest, at Mbombela Golf Club; credit GolfRSA.

In the B-Section openers, Free State and Boland bellowed their intentions with decisive victories.

Free State dominated the foursomes and extended their 3 – 1 lead over Border with five single wins. Skipper Heindrich Erasmus halved his game to seal a commanding 8.5 – 3.5 victory.

“We have a lot of young blood on the team and they really made a statement for us today,” said Lourens. “Christiaan Burke at number one did a great job to win 5 & 4 and Jan Carel Rossouw kept the momentum going with his 4 & 2 win. Franco Froneman, Mojalefa Xaba and Carlos Laranja all had really tight matches, but they dug in their heels and pulled it through for the team.”

Free State also dished up one of the highlights of the day.

“Carlos and I played the foursomes together, and at the 12th hole – our third – he hit the tee shot. I had 103 metres to the pin and holed out for eagle. During the singles, Carlos hit the same ball to 104 metres and also holed out. We will definitely be putting some money on the number 3 this week.”

Boland, meanwhile, scored a clean sweep in the foursomes and routed host union Mpumalanga 8 – 4 with singles wins from Aidon Willemse, Jurie Mostert and Keagan Thomas and halves from Phillip Swanepoel and Meyer Pauw.

The match between Eastern Province and North West went right down the wire.

The foursomes ended 2-all and 5 & 4 wins from Beyers Smith from North West and Eastern Province’s Kyle de Beer kept the match on a knife’s edge. Then Johan Krugel, Riaan Swart and Liam van Deventer reeled in 3 points to swing the momentum in North West’s favour and Wade Jacobs made sure of a 6.5 – 5.5 win when he halved against Altin van der Merwe.

In Tuesday’s second round, the host union will try to get their campaign back on track against Eastern Province, Border go toe-to-toe with Boland and Free State will go head to head with North West.