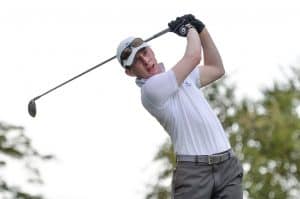 After a booming drive at the closing hole, the Barrassie golfer produced a superb approach and duly converted the putt for a three and a round of five-under 67 to move to 10 under par as he leapfrogged South Africa’s Garrick Higgo at the top of the leaderboard.

Walker, chasing his first trophy since winning the Agadir Grand Prix in 2017, could make a Scottish double if he follows in the footsteps of compatriot Liam Johnston, who lifted the trophy after an epic final round tussle with countryman Connor Syme and South Africa’s Christo Lamprecht at Leopard Creek two years ago.

Higgo set the 36-hole target at seven-under with rounds of 67 and 70 and the Scotsman was two strokes adrift on moving day in the Bushveld.

He bogeyed the par three second, but bounced back with a brace of birdies at the third and fourth holes to replace the South African at the top of the leaderboard. Further gains at nine and 11 kept him in front, although first round leader Jayden Schaper joined him in the lead over a few holes around the turn.

Walker held on to pole position with a run of straight pars from the 12th to the 17th as Schaper faltered down the back nine. The defining moment of Walker’s round came at 18, where he produced that grandstand finish.

Higgo, meanwhile, racked up four birdies over the last six holes for a 71.

The former SA number one will start the final round four back on six under par and two shots clear of Schaper and Ludwig Aberg, who both signed for 74s.

South Africa’s leading junior dropped from contention with a double bogey at 14 and a triple at the par five 15th. The big-hitting Swede had an equally tumultuous round that featured an eagle at the par five 13th and 11 at the next par five. Aberg showed great mental fortitude to finish with a pair of birdies that netted him a share of third on four-under.