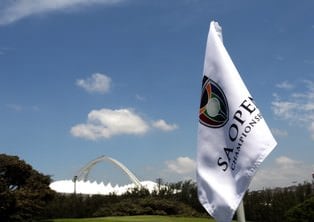 DURBAN (13 December 2010) – The South African Open Championship is a hugely attractive proposition at all times. Blend in an intoxicating cocktail of Major champions, international winners and some of the world’s top golfers chasing a purse of €1-million at the 100th playing of the country’s flagship event and it is easy to understand why the SA Open remains a Holy Grail for every Sunshine Tour player.

In recent months, the acclaimed Laurie Waters and George Waterman masterpiece has enjoyed some major modifications by acclaimed course construction company, Golf Data, all of which promises to dish up four days of inspiring feats, rousing shot-making and a contest to savour from 16-19 December 2010.

Over 70 years old, the original paspalum greens had lost their shape due to infestation.

“It had gotten to a stage where the greens had more foreign grass then paspalum and were starting to look like upside-down saucers,” explained greenkeeper Willie Botes.

After extensive research, the revamp committee settled on an ultra dwarf bermuda grass called Mini Verde. “More than 2000 courses world wide, which face challenges and conditions similar to ours – high humidity, heat and situated on the coast – have changed to this grass in the last five years,” said Botes.

“The benefits are huge. We have cut our water consumption down to a third and we are using less the half the amount of fertilizer. Because it is a very slow growing grass, this assists in keeping the ball speed consistent through the day.”

According to Botes, the greens at Durban Country Club have always been on the slow side and the new grass is already outperforming the paspalum.

“The grass has low temperature colour retention and will retain its colour in the winter, while the paspalum usually went dormant,” he explained. All the greens were stripped and fumigated and all the greens had their basis rotovated and shaped to provide more pin placement possibilities. And all the greens except the 16th were given subtle changes to make the holes more playable and easier to maintain.

“We opened the course six weeks after we sodded,” said Botes. “Feet on the greens help them to settle and firm up quicker. We sprigged the fringes with Mini Verde and inter-seeded with Bent to get the cover as soon as possible.”

Golf Data also reshaped all the greenside bunkers to more or less their original form and added extra bunkers to holes five, 14, 16 and 18. The bunkers were all re-sanded and a few tees were rebuilt and resurfaced.

“Lastly we are building a new chipping and putting facility near the first tee, which is something Durban Country Club has never had,” said Botes. “We hope to have this up and running for the SA Open.”

Botes declared Durban Country Club more than ready to meet the demands of the modern-day golfer. “If we get enough rain, our greens will be perfect for SA Open.”