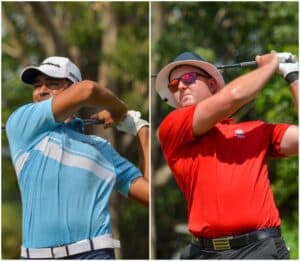 14 February 2022 – South Africa’s Yurav Premlall and Zach Chegwidden from England topped a packed leaderboard as action wrapped up in the opening round of the African Amateur Stroke Play Championship at Leopard Creek on Monday.

On a blistering hot Valentine’s day at the championship layout bordering the Kruger National Park, the duo shot sizzling five under par rounds of 67 to edge into a two-shot lead in the second event on the South African Swing series.

Chegwidden bogeyed the fourth but turned things around with a birdie on six. The Orsett golfer racked up four more in the next seven holes and was set up for an eagle finish on the iconic island green at the par-five 18th, but his putt hit the rim of cup and hopped out.

“I’ll take it,” Chegwidden said after his birdie finish. “I hit a very good drive on 18, only had 197 in and it was playing a bit downwind, so I thought I would crunch an 8-iron. It came out a little right and I was a little jittery as it was in flight, but it came out all right. The putt was a little bit racy, and it hit the middle of the cup, but I had a tap-in birdie, so really happy with today’s result.

“It was a solid round, but I didn’t get off to a great start. I mean, on the scorecard it looks great, but there were a lot of pars. Four missed greens on the first four holes, and when you don’t chip those stiff for the par putt, it can get a little tough. Then I settled down and got comfortable; hit some really good shots and holed good putts.”

By contrast, Premlall, who started on the 10th, turned four-under, but the GolfRSA National Squad member’s back nine turned into a masterclass of up-and-downs.

The Glendower golfer struggled to find greens, but scrambled incredibly well, with par-saving up-and-downs from the traps on five, seven and nine, and off the greens at the sixth and eighth holes.

“Going four-under on the front around this course always sets the tone for the rest of the day. Then I try to hang in there, and try to get a few more birdies, but if don’t, it’s cool, as long as I don’t give any shots back and post a good number,” said the reigning Nedbank Junior Challenge champion.

“I was really good around the greens, and I just need to keep that up for the rest of the week, but let’s hope there is less scrambling tomorrow and more greens in regulation; that would help.”

GolfRSA No 1 Christiaan Maas posted a three-under 69 with a birdie finish on the 18th, and he was joined by fellow Pretoria golfer Francois van der Walt, who had to tidy up for a bogey on his closing hole – the ninth – after his par-putt ran straight across the hole.

Casey Jarvis signed off with a two-under 70 to share fifth with Bob Geurts from the Netherlands. The first-time visitor to Leopard Creek was four-under playing the last, but the Dutchman caught a flier with his second to the island green and walked off the par-five with a seven on his card.

Turnberry’s Jack Broun carded one-under 71 in his first-ever competitive round at Leopard Creek and will start the second round in joint seventh with GolfRSA National Squad members Sam Simpson and Jordan Wessels.

Maas and Jarvis also championed the GolfRSA Senior Proteas into the lead of the Team Competition, which is played concurrently with the first 54 holes of the stroke play championship.

The GolfRSA Senior Proteas posted a total of one-under, with Christiaan Burke – making his national debut this week – contributing a 78, while Jordan Duminy carded a non-counting 79. The South African senior side leads England by two shots.

Scotland finished in third, four off the pace, and Kenya in fourth on 13-under. The GolfRSA Junior Proteas posted a 16-over total, and Zimbabwe brought up the rear on 26-over.