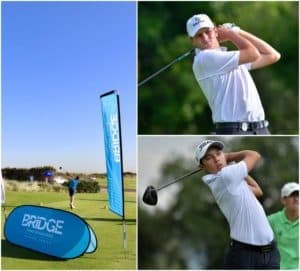 18 March 2020 – GolfRSA National Squad member Casey Jarvis and 13-year-old Fabrizio de Abreu threw their names in the hat this March for a chance to tee it up in the prestigious North & South Junior Championship later this year.

South Africa’s number one ranked Jarvis – fresh off his double in the SA Stroke Play and Aon South African Amateur Championship – added another Bridge Fund Managers Junior Series title to his impressive resume when he won at State Mines.

The 16-year-old Jarvis, who also qualified last year, shot a four-under-par 68 at his home course to beat Liam Vermaas by one shot.

In a closely contested round, Jarvis had to stave off Benoni Country Club’s Vermaas and Nico Els from Centurion Country Club to come out on top.

“I am known as an aggressive player, but I have been trying to change things up as I have learned that being aggressive all the time doesn’t help when things don’t go according to plan. One of the highlights of my round was the eagle I made at the par five third. I hit a good drive and then hit an 8-iron to 15 feet and made the putt. That gave me some good momentum,” said Jarvis.

De Abreu became one of the youngest winners on the popular junior golf development series with his triumph at Wingate Park in early March.

The Woodhill golfer birdied the final hole for a two-under-par 70 to edge out Nico Booyens, Luka Stanisavljevic, Stefano Marchetti and Tiaan Diedericks by one shot.

The Hatfield Christiaan School pupil did not know he needed to birdie the final hole to win.

“I was not aware of the scores, but just told myself to keep focused because I knew I was in a good position,” he said. “I hit a great drive down the middle of the fairway on 18, leaving 230m to the green. My 3-wood stopped about 3m from the hole and I two putted for birdie.

“It was only when I walked off the green and my friends came running to congratulated me that I realised I’d won.”

De Abreu and Jarvis both qualified for the North Final, where they will compete against the rest of the winners in the North events for the main prize – an all-expenses North and South Junior Championship at Pinehurst, North Carolina in July 2020.

The North and South Finals, scheduled for the 4th and 5th of April was postponed in accordance with GolfRSA’s mandate to cancel or postpone all golf events. This was done in accordance to the guidelines laid down by the Department of Sport in terms of the Covid-19 pandemic.

“We are delighted that Casey has qualified for the regional final, which is going to have a star-studded line up of some of SA’s finest young golfing talent. Fabrizio is an exceptional young golfer. We look forward to hosting this rising star at the regional finals,” said Paul Stewart, Chief Executive at Bridge Fund Managers.

The Bridge Fund Managers Junior Series launched in 2017.
The series is managed by the SA Golf Development Board and endorsed by GolfRSA. Open to boys and girls in the U13 and U19 divisions, the #bridgejuniorseries is played across 18 tournaments at leading courses countrywide. Visit juniorseries.bridgefm.co.za for the full schedule and entry mechanism, or contact Peter Little of the SAGDB on littlegolfers2@gmail.com.