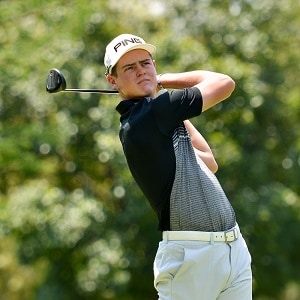 7 February 2018 – The South African Stroke Play saw a fantastically high standard of golf as no less than 66 players went under par during the second round at Pecanwood Golf and Country Club, resulting in a cut of 65 and ties falling at two-under 142.

World number 10 Oliver Gillberg from Sweden and South Africa’s number two ranked Wilco Nienaber proved the most inspired men in the field, both posting excellent scores to share the lead at 15-under 129.

However, eight players are within five shots of their target, led by KwaZulu-Natal’s Matt Saulez.

Gillberg accrued 10 birdies as he navigated the Jack Nicklaus-designed championship layout in 62 strokes.

“I’m really happy with that score, despite the last two holes,” said the Swedish National Squad player. “The birdie putt at 17 pulled up an inch from the hole and the one at 18 hung on the edge, but just wouldn’t drop. It was disappointing, but you just have to move on.

“I’m really pleased to be in a strong position, because it was quite a job to adjust to the altitude when we first got to Pecanwood. The ball travels at least a club and a half further, so we spent a lot of time with the Trackman on the driving range to get our distances right.

“I still didn’t feel too confident hitting the driver and the irons in the first round, but today I felt really good and I hit the ball well. It’s a great course and I’m really starting to enjoy myself.”

Nienaber, looking to add another victory to the 12 titles he has accrued since the beginning of 2017, started on the back nine. He put together nine birdies for a 64, but was left rueing a bogey finish.

“I hit a good drive, but a really poor approach and I finished in the rough,” said the 17-year-old GolfRSA National Squad player. “I had a very weird lie; the ball wasn’t plugged, but it was as if the grass had sucked it in and I didn’t come out well with the chip. “It’s never nice to finish with a bogey; it kind of leaves a sour taste in your mouth, but tomorrow is another day.”

One of the longest hitters in the field, the Bloemfontein golfer booms his drive around 315 metres and his added length is a plus factor at the heavily-bunkered layout.

“My distance off the tee is definitely to my advantage, because I’m able to avoid all the bunkers and leave myself a short or wedge in,” said Nienaber.

Saulez looked unlikely to be anywhere near the top of the leaderboard after four holes, but he picked up four shots in three holes when he followed birdies at five and six with an eagle three at seven.

Four more gains on his back nine saw the Durban Country Club golfer home in 64 strokes and he will start the final round two off the pace.

“The birdies gave me some nice momentum after I dropped a shot at the third,” said Saulez, another member of the GolfRSA National Squad and currently fourth in the Open Amateur rankings.

“I hit a good drive but I found the bunker left. I took a three-wood and gave it some gas and finished three feet from the hole. All my birdies were inside six feet, so I hit the ball really well, especially my approach shots. The longest putt I had was at 18, where I holed a 12-footer for birdie.

“It’s great to be near the top at the halfway mark. Anytime you play with top golfers, you raise your game, so I’m really looking forward to playing with Wilco and Oliver.”

Overnight leader Keaton Slatter returned a 68 to finish three shots back, while Robin Dawson from Ireland – the runner-up last year – played his way into contention with a 65. The Irishman shares fifth with South African pair Louis Albertse and James du Preez and Swede Ludwig Aberg.