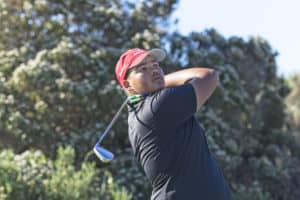 Jordan Duminy of Mossel Bay, who represented the International team in the Junior Presidents Cup in Australia in December, produced a spectacular shot from deep in the trees to win the Bridge Fund Managers Junior Series title at Clovelly Country Club on Friday 27 September 2019.

Having pushed his second shot right of the green on the first play-off hole against Ayden Senger, Jordan produced a world class pitch and run to set up a tap in for birdie and claim his first #BridgeJuniorSeries title.

Jordan, a Pinnacle Point member coached by legendary Val Holland of the Louis Oosthuizen Junior Golf Academy, birdied the first three holes on his way to a 31 on the first nine, on a day when he followed each of his three bogeys with a bounce-back birdie.

By winning the title Jordan has secured his place in the regional final of the #BridgeJuniorSeries to be played over 36-holes in April 2020, where he will compete for the ultimate prize – an all-expenses paid trip to the Junior North and South Championship at Pinehurst, USA in July 2020.

“The opportunity to compete for a spot at Pinehurst is a big attraction to playing in the Bridge Junior Series,” said Jordan. “I have played Pinehurst twice before so hopefully I will win the regional final and get to go back.”

“Jordan and Ayden produced an excellent battle on the fairways … and greens today,” said Paul Stewart, Chief Executive at Bridge Fund Managers. “Ayden will have another opportunity when the Series moves to Royal Cape on 13 October. Hopefully he wins that tournament so we can experience another thriller featuring Jordan and Ayden at the regional finals next year.”