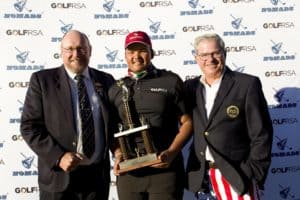 The 16-year-old put the South African golfing fraternity on alert in March when he chased former number one ranked Wilco Nienaber all the way to the 36th hole in the South African Amateur Match Play final in March.

He impressed with a top 14 finish in the East of Ireland Open Amateur at County Louth and again when he reached the match play stage in The Amateur Championship at Portmarnock in June, but never has the GolfRSA National Squad member been more impressive than over 54 holes at the Jack Nicklaus signature course.

Duminy accelerated through the field with a stunning seven-under-par 65 on day one – improving the 13 year amateur course record by one shot and setting a new junior course record.

The Louis Oosthuizen Junior Golf Academy member kept his five-shot overnight lead intact with a level par 72 in the second round and capped off the week with a final round two-under 70 for a truly magnificent wire-to-wire victory on nine-under 207.

Duminy credited the recent GolfRSA National Squad Tour to Ireland and Scotland for his good run of form.

“I’m really so pleased with this win and with the way I managed my game this week,” he said. “My ball-striking was great and the putter was hot, but mostly, it was course management that got me to the winner’s circle.

“We played on top ranked courses and I learned a lot from watching the Brits. You can’t put a price on what I learned from competing over there. The courses were a lot tighter and the wind didn’t blow half as much as what we had to face in Ireland and Scotland. It definitely helped me here. I played the course far more strategically this week than I’ve ever played this course before.”

A steady front nine, highlighted by a trio of birdies, kept him clear of the chasing pack, led by Dimension Data Junior Open champion Christiaan Maas.

“I had quite a big lead, so I knew if I could make a few birdies and keep my card clean, I could pull it through,” Duminy said. “I didn’t need to do anything fancy. I birdied two, five and six, but I had a soft bogey after I hit my drive short of the bunker at the par three (7th) and two-putted.”

Duminy started the homeward loop with a seven-shot lead. He voided a drop at the par five 13th with a huge birdie putt at 14, and boxed a 12-footer at the 17th to go eight shots clear on 10-under.

“I had 150 metres flag after a decent drive the par five (13th), but I misjudged the wind and hit my 4-iron into the water.

“At 15, I drove it a bit too far right and I couldn’t see the flag. I hit a knock-down sand-wedge from 117 metres in. The ball pitched into the hill and sat down. I had 25 feet to the hole and I aimed it a foot left and rolled it in.”

His tee shot into the par three 17th pitched 12 feet from the hole and he made the birdie putt to move to 10-under.

“On 18, my second pitched short of the green. I chipped it, trying to use the slope at the back of the green, but it didn’t quite come off and I left myself with a 10-foot downhill putt. I barely touched the ball, and it ran straight past the hole. It wasn’t great finishing with a bogey, but I’ll take it.”
Just before he started the final round, Duminy received news that set him up for a great day. 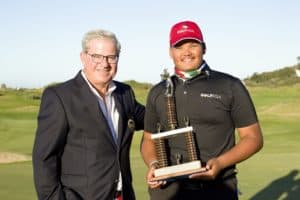 “I am hoping to make the 12-man team International Team for the Junior Presidents Cup in December and I found out that I’ve moved into 12th place after the amateur golf world rankings were updated on Wednesday,” he said. “Hopefully this win will boost my rankings a bit more.

“It’s still a long way to the cut-off in September, but I am really hoping I will get to represent South Africa in Australia with the other GolfRSA juniors.”

Pretoria Country Club’s Maas returned an even-par 72 to finish in second on 2-under, CJ van Wyk from Fancourt carded 73 to take third on two-over and former Sun City Challenge Under-15 champion Jaden Deltel finished a further stroke back in fourth after posting 71.