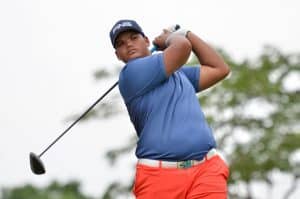 The Louis Oosthuizen Junior Academy booked his spot in the match play field with rounds of 72 and 69 in the 36-hole qualifier, and mowed down Englishman Mark Hyde 6 & 4 in Tuesday’s first round to comfortably advance to the top 32.

He edged clear of Kieran Cantley with a birdie at the 11th hole in their second round clash and went 2-up with a gain at the par three 13th. The Irishman retaliated with a brace of birdies at 14 and 15 and squared the match with a birdie at 18 after Duminy boxed another birdie putt at 16.

The Mossel Bay junior held his nerve and drained a tester for birdie to win the match.

“I drained a 17-footer at the 19th hole to win and I really relieved,” said the Pinnacle Point golfer. “I nearly hit my first shot in the third round out of bounds, but grinded it out and won the hole and then just got comfortable from there.”

Duminy went 2-up on compatriot Stals Swart with a birdie at the fourth, but the Pretoria Country Club golfer hit back with an eagle at the par five sixth.

“I hit a good tee shot at the fourth to about five foot and made the putt. After Stals eagled 16, I was still 1-up, and I just told myself to make pars and put the pressure on him to go for the birdies. We both made a couple of birdies coming in, but I was back to 2-up when he dropped at 15.

A par-birdie finish for a 2 & 1 win got Duminy a date with Irishman Ronan Mullarney in Thursday morning’s quarter-final. “I am really happy with how I have handled myself this far and the way I’ve kept grinding to keep it going in the tight stretches. I’m really excited for tomorrow.” 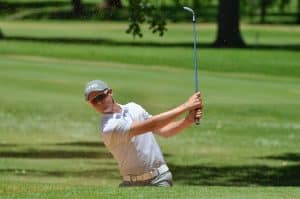 GolfRSA number one Wilco Nienaber from Bloemfontein is through to the quarter-finals of the the South African Amateur Championship at King David Mowbray Golf Club; credit Ernest Blignault.

Nienaber knocked out James Sugrue from Ireland 4 & 2 in round two and denied Luca Filippi from Western Province a stab at the elusive double.

He won the first hole and kept the advantage going to dispatch the newly-minted Proudfoot Trophy winner 2 & 1. The Bloemfontein golfer goes up against Joe Long from England, who needed 19 holes against countryman Tom Plumb in the morning session, but mowed down Welshman Gaelen Trew 7 & 6 in round three. 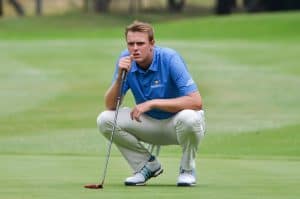 Walker won the first hole with a birdie, but the Strand golfer hit back with successive birdies on the second and third holes and an eagle at the par five sixth cemented his authority. A third birdie at 10 and another at the 18th hole sealed a 4 & 2 result for Germishuys.
The Ernie Els and Fancourt Foundation golfer was equally impressive against Greg McKay, routing the KwaZulu-Natal golfer 5 & 4.

Germishuys will play Jannik de Bruyn in the quarter-finals. The German Golf Team member beat Tyran Snyders from Western Province 4 & 3 and took out the last Frenchman standing, Nicolas Muller, 4 & 2 in the third round.

The final spot in the quarter-finals was another closely contest affair between last year’s Proudfoot Trophy winner, David Langley, and Western Province stalwart Elton James, who was 4-down after 10 holes.

The 44-year-old James racked up birdies at 11, 13, 16 and 18 to square the match and halved the 19th hole when he matched Langley with a par. An errant tee shot into the trees left signalled the end of the South African after Langley’s drive split the fairway.

The Englishman pitched his approach 25 feet from the hole, but James’s second out of the trees finished short of the green. He chipped it to 20 feet, but left his par putt to halve an agonising six inches short of the cup.

Langley, who was knocked out in the first round at Durban Country Club last year, will tackle Coalan Rafferty from Ireland for a semi-final berth. The Dunkalk golfer served up the second upset of the day when he went up against compatriot Conor Purcell in the third round and eliminated the reigning Australian Amateur champion 3 & 2.