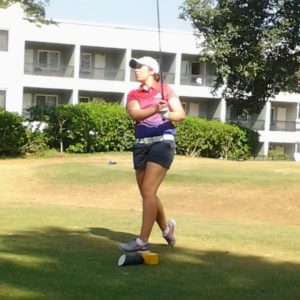 Danielle du Toit in action during the 1st round of the All India Ladies Amateur Championship Match Play Stage; credit GolfRSA.

21 December 2017 – Danielle du Toit crossed the first hurdle in the All India Ladies Amateur Championship with ease in Bangalore, India on Thursday.

The Gauteng North golfer routed Tiya Chowdery from the United States 4 & 3 to reach the second round of the match play stage at the Eagleton Golf Resort course.

“Danielle had a fast start against Tiya, who is in India to visit her grandparents,” said Womens Golf South Africa President Sally Greasley.

“She holed a long birdie putt at the first and won next two holes with pars to go 3-up. They halved the fourth and Danielle holed another solid birdie putt to win the fifth. They halved six, but unfortunately Tiya drove her ball behind a tree at the seventh and could only punch out.

“Danielle took advantage and hit her second close to the pin to win the hole and go 5-up. She hit a poor second at the eighth, though, and was left with a difficult chip. Tiya was on the green and holed her putt to win the hole.”

Determined to get the shot back, 18-year-old Du Toit hit a great drive down the hill at the ninth and parked her approach just short of the pin.

Chowdery’s second rolled to the back of the green, leaving her with quite a distance to cover. The 14-year-old chose to putt, rather than chip, but only managed to cover half the distance to the hole. She missed her par attempt, and Du Toit went 5-up with another birdie.

“After the turn, they halved the 10th in birdies, but Danielle lost her drive left into the trees at 11,” said Greasley.

“She punched out into the bunker, hit a poor trap shot and was forced to chip it close, but Tiya was already on for two and she made her putt to trail 4-down. Danielle found the bunker at the par-three 12th and just managed to get the ball on the green. She missed the par-putt, though, and her lead was cut to three.

“They halved 13, but Danielle won the 14th with a nice long putt to go dormy 4. They halved 15 and that was the end of the match. Danielle played well and was obviously delighted to win her first match. She held her nerve at tricky moments, had a couple or errant shots and rallied well.

“Although Danielle only competed in nine events this past season due to the academic pressure of her final school year, she showed a lot of experience and maturity and played the match sensibly and by staying out of trouble.”

The Pretoria Country Club golfer will face Ananya Datar from India, who dispatched compatriot Khushi Khanijau 4 & 3 in Thursday’s second round.

Sanjana (no surname) produced one of the biggest upsets of the day when she knocked out the 36-hole stroke play qualifier winner, Nayanika Sangha.

On Wednesday, the Indian player denied Zethu Myeki a spot in the match play field when she clinched the last of four spots on offer in a six-way play-off. Sangha was dormy 3 at 15, but the 32nd ranked Sanjana fought back to take the match to a thrilling finish. She took the match 1-up at 18.

The third round follows in the afternoon.