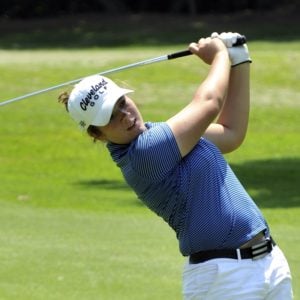 22 December 2017 – South Africa’s Danielle du Toit is through to the semi-final round in the match play stage of the All India Ladies Amateur Championship after two solid victories at the Eagleton Golf Resort course in Bangalore, India on Friday.

The Pretoria Country Club golfer mowed down Ananya Datar from India 4 & 3 to reach the quarter-finals and knocked out fourth-ranked Indian golfer Sifat Sagoo 3 & 1 to reach the final four.

“We had a few breath-taking moments in a very exciting day, but Danielle played some fantastic golf to win both her matches,” said Womens Golf South Africa president Sally Greasley.

“She birdied the opening hole to go 1-up in her second round match against Ananya. She lost the next hole after her chip to the green was a bit too aggressive and left her with a very long putt, but she regained the lead with a great drive and a short putt on the third for par after Ananya failed to up-and-down from the bunker.

“Ananya holed a huge putt that twirled round the hole before it hit the bottom of the cup for bogey at the par-three fifth, but Danielle responded with a great par. She hit another great chip close to the pin at six and holed the birdie putt to go 2-up and went 3-up with another superb birdie at seven. They halved eight. Danielle missed a birdie chance at nine after two great shots, but par was good enough to turn 4-up after Ananya sent her second shot over the green and finished with a bogey.”

Du Toit moved 5-up on Datar when she reached the green in two at 10, but gave the shot back at 11 when she drove the fairway bunker.

The duo halved 12 and 13 and the South African hit a magnificent drive at 14 and holed a short putt to go win the match after her opponent chipped it short from the back of the green and missed her putt.

“Danielle played Sifat, a delightful 16-year-old from Delhi, in the quarter-finals,” Greasley said.

“For the first time in five rounds, Danielle failed to birdie the par-five opening hole, but she quickly made up for it with a fantastic drive and super pitch to the green at the second. Her birdie putt lipped the hole, but Sifat made bogey, giving Danielle a 1-up lead.

“They halved the third in birdies and halved the next two holes. Danielle had a great drive over the trees at the par-five sixth, but found the bunker with her second shot. Sifat found trouble off the tee and needed two more shots to get on the green. When she missed quite a long putt, Danielle holed hers to go 2-up.”

Sagoo hit a magnificent trap shot to 10 feet and boxed her birdie putt at the seventh, and squared the match with another good birdie at the eighth.

“Both players were on the ninth green in regulation,” said Greasley. “Danielle regained the lead when Sifat’s putt lipped out and she went 2-up with a great approach and a short birdie putt at 10.

“Danielle remained 2-up until 14, where Sifat made a great birdie to cut her lead to one and they halved 15. Both players both hit great drives down the par-five 16th and reached the green in two, but after Sifat missed a tough downhill putt for eagle, Danielle holed her 12-foot eagle putt from pin high right. She was now 2-up going down 17.

“The 17th is a difficult par-three over a dam. Danielle found the water in the first round, but she hit a great shot to finish about 20 feet from the pin. After Sifat found the bunker, she only managed to get it onto the fringe of the green and her putt went past the hole.

“Danielle lagged her first putt close and won the match when Sifat conceded the putt. I was really proud of the way Danielle played both matches. Once again, she kept a cool head when she hit trouble and in both matches, as soon as she lost a hole, she rallied to get the lead back and did so.

“They also changed the pins for the quarter-final and found some very tricky spots, but as the Tournament Director said, it is the same for everyone! There was also a big upset in the first match out with the number two ranked Diksha Dagar being beaten on the last hole by the seventh ranked Ashley Lau Jen Wen from Malaysia.

“Danielle will face Rhea Purvi Saravanan, another stunning player from Delhi, in the semi-final, which promises to deliver more exciting action.”