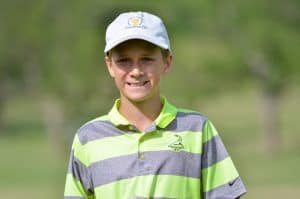 Leader Jean du Toit is targeting a wire-to-wire win in the Nomads Gowrie SA U-15 Challenge by one shot at Gowrie Farm Golf Estate; credit GolfRSA.

29 April 2021 – While Ryan Dreyer tries to win the SA Mid-Amateur Championship in Stellenbosch, another Eagle Canyon member – 13-year-old Jean du Toit – has title hopes of his own in KwaZulu-Natal’s Midland.

The slight youngster stretched his one-shot overnight lead in the Nomads Gowrie Farm SA U-15 Challenge in round two and the teenager is champing at the bit to finish wire-to-wire style at Gowrie Farm Golf Estate on Friday.

On a tougher scoring day in the wind, Du Toit only notched two birdies – the first at the par-3 fourth and his second coming nine holes later on the par-5 13th.

A second 75 moved Du Toit to seven-over, but he has a four shot lead on the quartet in his wake.

Country Club Johannesburg’s Vuyisani Makhama and Tristan Boise from Atlantic Beach, both members of the South African Golf Development Board (SAGDB), carded respective rounds of 74 and 76 to tie for second on 11-over with Roelof Craig and Dian Kruger.

Craig from Silver Lakes shot 76 and Centurion’s Kruger returned a 78.

A round of 73 boosted West Bank junior Luke Moore to joint sixth on 12-over alongside Josh Daniels. The Kuils River junior, also a member of the SAGDB, posted 75.

Grant Labuschagne racked up three birdies en route to a one-over-par 71 that earned him low round honours and propelled the Randpark junior to a tie for eighth with Andries van der Vyver from Strand Golf Club and Serengeti’s Marno Lange.

The biggest mover on the day, however, was 13-year-old Southern Cape junior Graydon Lubbe. The Oubaai golfer improved 15 shots on his opening 101 and his round of 86 saw him in 55th place.