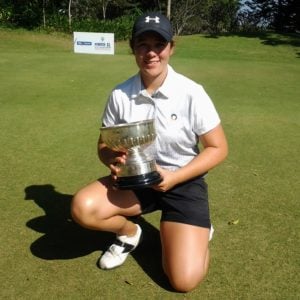 24 December 2017 – Missing Christmas with the family to travel to India and fly the flag for South Africa in the All India Ladies Amateur Championship proved well worth the sacrifice for Gauteng North golfer Danielle du Toit.

The 18-year-old Menlo Park matriculant became the 101st champion of this prestigious women’s amateur tournament when she routed Ashley Lau Jen Wen from Malaysia 2 & 1 in a nail-biting 36-hole final at the Eagleton Golf Resort in Bangalore on Sunday.

“I am over the moon that I made the return trip to India,” said the delighted Du Toit, who plays out of Pretoria County Club.

“I always felt that I let Womens Golf South Africa down when I was forced to withdraw during the stroke play qualifier last year, so I was really determined to push as far as I could this year. I was really encouraged by my runner-up finish in the Limpopo Open last month, because it has been a gruelling year academically and I didn’t play much golf. Once I qualified and won the first match, I was really fired up. I was determined to see it through to the final.

“This is a really fantastic tournament and I would like to thank the Indian Golf Union and the local spectators, who have been brilliant. Congratulations to Ashley for reaching the final. She was a great opponent and I needed every ounce of experience to clinch the match.

“I also want to thank Zethu (Myeki) and our president Sally Greasley – their support and encouragement throughout meant the world to me. This is the best early Christmas present ever and I’m really proud to be the new champion of this event.”

Greasley was extremely proud of Du Toit, who will be taking up a golf scholarship at the University of Purdue in the United States next year.

“It’s brilliant that Danielle could cap off her junior career with this victory,” said Greasley.

“She grinded her way through the first 18 holes and she was absolutely exhausted when she came off the 18th, but she showed true spirit to get back into the match. There was a large crowd following the girls over the second 18 holes and they were extremely appreciative of the way both girls played, never giving up right to the last hole.

“We are all mentally exhausted after such an up-and-down match, but we’re also on a bit of a high, because it was really an exhilarating match to follow. She proudly carried the flag for South Africa and was a very gracious winner.”

The two finalists teed off at 07h00 in the rising mist with just a few hardy spectators.

Both players parred the first hole. Wen made par at the second to 1-up, but Du Toit chipped in for birdie at the third to square the match. Wen took the lead again with par at the fifth.

“Danielle’s second shot at the par-five sixth hit a tree and bounced into a bunker,” Greasley said. “She had a tough lie and then her trap-shot landed in the bunker behind the green, leaving her in another tough lie. Ashley was on the green in regulation and two putted to take a 2-up lead.

“But Danielle showed great fighting spirit with a superb drive and a great lob into the green at seven. Ashley made par, but Danielle boxed her birdie to get her lead to one. At the eighth hole, she had another birdie chance, but the ball shaved the hole. She tapped in for a four and Ashley made five and the match was all square.”

The South African squared the match when she holed a lengthy putt on 15 for par. Wen took the lead again with a birdie at 16 and kept the lead until 18.

“Danielle remained 1-down until the fourth,” said Greasley.

“She hit a good chip, but missed a short putt and Ashley went 2-up with par. Danielle holed a great putt at the fifth to claim a shot back and sunk a very long putt at the sixth to square the match.”

“Danielle went 1-up for the first time in the match when Ashley bogeyed seven and it was all the encouragement she needed. Danielle hit a great drive down the 12th fairway and Ashley’s ball ended up just off the cart path. Danielle two-putted for par to 2-up.

“Danielle got lucky when her ball hit a branch and ricocheted back to the fairway at 13. She hit a good third into the green and Ashley left her third shot short. She putted way past the pin and Danielle left her putt just short, but when Ashley’s second putt lipped, Danielle tapped in to go 3-up.”

Du Toit’s tee shot veered into the trees at 15. The ball hit a tree and landed in a bunker, while Wen got on the green in two.

“Danielle hit a fantastic shot out of the bunker onto the green to about four metres from the pin,” said Greasley. “Ashley’s first putt went past the hole, but finished very close to the pin. Danielle drained her putt to remain 3-up.

“Danielle missed a long putt at the par-five 16th and the ball rolled past the pin, leaving her a difficult uphill putt. Ashley sank her par-putt and Danielle missed hers, so they walked to the 17th with Danielle dormy two.

“The 17th tee was moved into in a difficult position with a palm tree overhanging the approach on the right. Ashley’s ball landed short of the pin, and she was left with an uphill put.  Danielle landed just off the green on the left. She had a very difficult shot onto a green that slopes down to the water, but she pulled off a magnificent chip and her ball landed about four metres from the hole.

“Ashley putted up and her attempt went just past the pin. Danielle conceded the putt, took a big breath and became the 101st All India Ladies Amateur Champion when she sank her putt to clinch the match 2 & 1.”