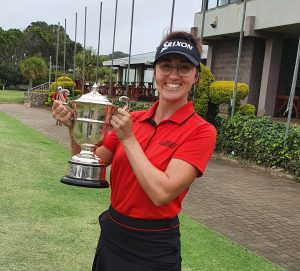 Du Preez, ranked eighth in the GolfRSA Women’s Open Rankings, thought she held a one-shot lead when she stepped up on the final tee box, but Flanagan’s birdie on the 16th had actually drawn the pair level.

“I thought that, with a one-stroke lead, birdie would be enough on the final hole,” she explained. “I hit a good drive down the fairway and nearly holed my 7-iron from 161 metres, with the ball ending up a metre past the hole.

“Demi also hit an excelled tee shot and approach, but she left her eagle putt on the edge of the hole and tapped in for birdie. At that point I thought I had two putts for the win. I knocked in the eagle putt and only in the score recording area did I discover that I needed to drop the eagle putt to win.”

The win is Du Preez’ second amateur title, to go with her two low amateur finishes on the Sunshine Ladies Tour last season.

“I’m so happy with the win, and to do it with an eagle on the last is very special.  It gives me so much confidence going into the SA Amateur Championships on Sunday,” said the 24-year-old Ernie Els & Fancourt Foundation member.

“The wind was intense. I don’t play at the coast that often, so I decided to get out of my comfort zone and to take some risks, especially on the last day. And it paid off.”

A full-time student, Du Preez is currently doing the second of a three-year General Club Management diploma through the Club Managers Association of South Africa.

It doesn’t leave much time for golf, but she made full use of her free time during her summer break.

“The win is down to the experience I gained competing against the best on the Sunshine Ladies Tour and all the hard work I put in over the holidays,” she said. “Playing with international winners like George Coetzee and Shaun Norris during the holidays also really upped my game. I learned a lot from watching how they plan their way around the course and how they approach their shots.

Du Preez will draw on all her experience as she starts the SA Amateur Championships on Sunday.

“I lost to Caitlyn Macnab in the SA Stroke Play last year and I was knocked out in the quarter-finals of the match play. Hopefully, with all know-how and skill I gained over the last 12 months, I can take it all the way to the winner’s circle this time around.”

The SA Amateur Championships tee off on Sunday, 14 February.

The men’s and women’s championships will be played concurrently. The men will have a 36-hole stroke play qualifier to decide the top 64 players that advance to the match play stage.