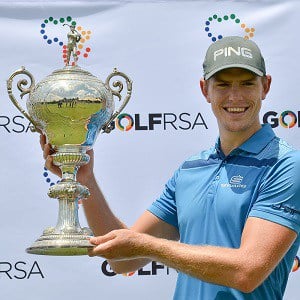 16 February 2018 – James du Preez sealed an emotional return to the winner’s circle when he captured a three-shot victory in the African Amateur Stroke Play Championship on Friday.

The 22-year-old Pretoria golfer produced a flawless 64 in the third round at Glendower Golf Club to surge seven shots clear of the field and withstood a spirited final round charge from reigning Sanlam SA Amateur champion Christo Lamprecht.

Du Preez had four birdies, including three on the bounce from 11, but surrendered three shots to close with a one-under 71.

“I’ve never had a seven shot win and I think it’s easier to be one or two behind and chase than to lead by such a large margin, because you can get aggressive,” said the champion who triumphed on an overall aggregate of 14-under 274.

“I tried to stick to the same game plan, because I didn’t want to get complacent. The top moment of my final round was the birdie at 11. The round got away from me a little in the stretch from seven to 11 and I made a couple of bad decisions with second shots.

“I flew the green for four consecutive holes and it was tough to up-and-down for pars to back pins, so to get the birdie putt to drop at 11 just got the momentum going my way again. I felt like I had control of the round again.”

It had been nearly two years since the promising Pretoria golfer held a trophy aloft.

A recurring back injury took him out of the game and he dropped as low as 130th in rankings last year. He showed glimpses of the form that carried him to the number two spot in the South African Golf Association Open Amateur Rankings in 2016 with a top five finish in the South African Stroke Play Championship at Pecanwood last week.

Success in the African Amateur boosted him to seventh in the standings, but it was much more than a win for Du Preez. It exemplified his drive, determination, willpower and commitment to reach the top level of competition again.
“I was diagnosed with ankylosing spondylitis. It’s a form of arthritis that primarily affects the spine and it’s basically a life sentence,” said Du Preez.

“I had surgery in 2012, which meant six months off. That’s been the story year on year. It was hard at first to accept this news, but I’ve made peace with it. I’d say it’s much harder on the people around me, like my parents and friends.

“The last two years have probably been the toughest of my life. I didn’t play for about 15 months. There was times when golf was probably the last thing I thought about. I started working with a friend of mine in the coffee industry, which was really cool and it brought some balance back into my life.

“I worked with a great team at the HPC Tuks Golf Academy. I follow a strict gym routine to strengthen my core muscles and I have surrounded myself with people all trying to find a way for me to manage the condition so I can pursue my goal of playing pro golf.

“I’m in a really good space compared to two years ago. As golfers, we often make decisions based on what we want to happen that can be to our detriment. We forget that it’s just golf. At the end of the day, there is so much more to life than what happens on the golf course. This win is a confirmation that I’m doing the right things, and that the people in my life are the right people.”

Second place came down to a fight between Southern Cape juniors Lamprecht and Martin Vorster.

Lamprecht won the race when he reeled in five birdies over the last six holes for a 66, while Vorster returned a 68 to take third on 278.

“I’m as happy as Larry,” said Lamprecht, who will start his Sanlam SA Amateur title defence at Durban Country Club in a fortnight. “It was always going to be a huge task to catch James, but I’m pleased that I reduced the gap to four shots. I drove the ball well and got the putter going nicely. This week was a good confidence booster and I’m taking this game to Durban.”

Written and released by Lali Stander on behalf of GolfRSA, a SAGA and WGSA Not-For-Profit