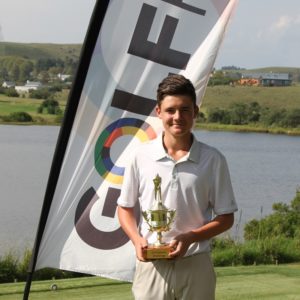 5 April 2018 – Herman du Plessis claimed his maiden junior national title in the Gowrie SA Under-15 Challenge after emerging from an enthralling final day battle with a four-shot victory on Thursday.

In a tense finale, the Eagle Canyon golfer closed with a three-under-par 69 to celebrate success on a winning score of three-under 210.

Du Plessis began the final round in joint second, but just a shot off the pace and an eagle at the opening par-four saw him leapfrog fellow Central Gauteng junior Jaden Deltel for the lead.

“That was a really welcome surprise,” said the 14-year-old BDGA Academy golfer.

“I hit 3-iron off the tee and had about 100 metres to the pin, so I hit a knock-down sand-wedge; the ball gave two bounces and disappeared down the hole. It was really unexpected, but it gave me some great moment at the start of the round.”

Du Plessis and Deltel both bogeyed the third hole, but Du Plessis picked up a birdie at the fifth before the players both dropped another shot at the fifth.

“At this stage, I had a three shot lead, but Jaden birdied eight to close the gap,” said Du Plessis. “We both made pars around the turn but I had a two-shot swing at 13 when I made birdie and bogeyed the par five.

“I went with a 5-wood, because I’d been struggling with the driver all day. I struck it well and left myself 190 metres to the pin. We were playing downwind, so I went with an 8-iron and I left it short and right of the green. I hit a great chip to give, though, and holed the putt.”

The Helpmekaar College learner gave the advantage back straightaway with a three-putt bogey at 14, but still had a tidy two shot lead going down the last four holes.

“Then, out of nowhere, Jaden levelled the score with birdies at 16 and 17,” said Du Plessis. “I told myself to stay cool. There was no point in panicking, because I’m not playing his shots. You can only control your own game.

“I hit a solid 5-wood down the 18th fairway. Jaden cleared the bunkers, but his tee shot finished in the rough. He went first and it looked like he duffed his hybrid. It came up short and finished in the lip of the greenside bunker. I laid up with a full 9-iron and hit a sand-wedge from 100 metres out to the middle of the green.”

Deltel was unable to get out of the trap on his first try, which meant Du Plessis just needed to lag his first putt close and tap in for the win.

“It’s a great feeling to get my first win on the national junior circuit,” said the beaming winner. “This is the biggest victory of my career and it was a great battle. Jaden is in great form and despite slipping backwards, he never gave up and clawed his way back into contention. To be honest, it could have gone either way at the end.

“It’s easy to get distracted when you have a two or three shot lead, so I just kept focused and played it shot by shot. It was really intense, but finally I did it so I’m really happy.”

Deltel closed with a 75 to take sole second on one-over 214, with Rorisang Nkosi from North West a further shot back after carding a final round 75. Enzo Barbaglia and Kayle Wykes made it four of five for Central Gauteng when the pair carded respective rounds of 69 and 74 to tie for fourth on 216.