Du Buisson chips his way to victory at Princes Grant

Du Buisson chips his way to victory at Princes Grant 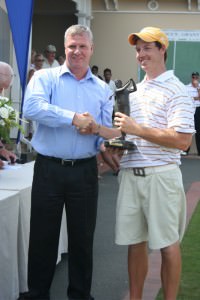 Johan Du Buisson made an impressive chip-in eagle on the last hole of regulation play to force his way into a playoff with Nicol van Wyk at the Princes Grant Amateur Open. Nicol van Wyk was waiting in the clubhouse on 1 under par 287, thinking he had done enough to win, when Du Buisson waltzed into the clubhouse eager for the pending playoff which he then won on the first playoff hole with a solid par while van Wyk pulled his tee-shot left and then hit is second into the greenside and failed to get up and down.

The week saw the top amateurs in the country fighting it out on the well manicured Princes Grant layout in what promises to become one of the leading amateur events in years to come. This year saw Princes Grant National Amateur offering World Amateur Golf Ranking points and as it is an invitational tournament, where only the top 60 amateurs are invited, the field was as strong as could be which means a lot of points were on offer. In years to come this factor will lead to more of the top players coming to play this event in the never ending bid to keep moving up the Players Ranking list. 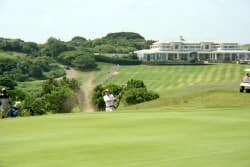