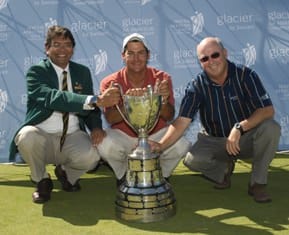 BENONI (6 March 2009) – There were times during his professional career when Ryan Dreyer played matches at his club for money to supplement his income on tour. He rarely lost, and at Benoni Country Club on Friday, the 36-year-old reinstated amateur drew on that experience to win the Glacier SA Amateur Championship.

It completes a remarkable comeback to the game for Dreyer. After leaving the tour, where his best finish was second in the Kalahari Classic, and returning to the amateur scene, he has finished 12th in the SA Amateur Stroke Play Championship, third in the Central Gauteng Closed and now first in the Glacier SA Amateur.

“It hasn’t quite hit home yet. I think it will hit me later what I’ve done, and I think it’s a great achievement,” he said.

Dreyer made a strong start in the final and was 5up through nine holes of the first 18. Ford closed the gap to 3down early on the back nine, but Dreyer surged to 6up through 16.

“I played really well early on. I put him under pressure, he made one or two mistakes, and the next thing I knew I was six up,” said Dreyer.

But Ford won the next two holes to close out the first 18, and then took the first two holes of the afternoon 18 as well for four consecutive holes that suddenly saw him right back in the match at only 2down.

“I think that gave him a bit of hope and I was suddenly on the back foot,” said Dreyer, who remained 2up through 26 holes. Ford conceded the 27th hole to Dreyer. They halved the next two before Dreyer won the 30th with a birdie. The next two were halved again, and Dreyer took the match on the par-three 15th. Both players were short of the green on the par-three. Ford played a poor shot into the bunker for his second and Dreyer hit his chip to within inches of the hole. Ford then conceded.

“I didn’t strike the ball as well as I would’ve liked that second 18, but I got the ball in the hole,” said Dreyer, who offered some advice to the young amateurs he beat this week.
“I think at my age as a part-time golfer it’s great to compete and win. But if these youngsters can’t beat me, then they shouldn’t turn pro. I tried for ten years and played probably no different then than I did this week. I was making these scores on tour, and I can tell them it’s not good enough out there.”