Dreyer through to last 32 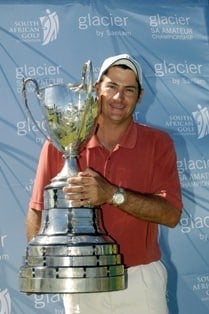 Ryan Dreyer, from Killarney Golf Club in Central Gauteng, won through to the last 32 in the match play stage of the 114th Amateur Championship today, which is being played at Formby Golf Club situated north of Liverpool, England.

Playing in very windy and wet conditions the 36 year old Glacier SA Amateur Champion overcame Victor Flatau, of Sweden, in this morning’s first round, 3 and 2. He then eliminated Daan Huizing (Netherlands) in a closely fought second round match, finishing one up.

Dreyer now takes on another former SA Amateur Champion in Welshman Nigel Edwards in tomorrow’s third round. Edwards won the Championship in 2007. This should prove to be an enthralling encounter between two very experienced campaigners.

The only other South African playing in the match play stage today was Adrian Ford, of Durbanville Golf Club, Cape Town. He lost his first round match to Englishman Matthew Nixon 6 and 5.

Winner of the Qualifying, 16 year old Matteo Manassero of Italy, won his second round match, against Steven Brown of England, in comprehensive fashion, 6 and 5.

No so lucky was the 21 year old Reiner Saxton (Netherlands) who lost his second round match, on the 19th hole, to Ignacio Elvira of Spain. Saxton was hoping to successfully defend the title he won last year.

Tomorrow the third round matches will be played at Formby Golf Club in the morning. Those winning will participate in the last 16 matches in the afternoon. All matches will be decided over 18 holes.