Dreyer loses in the second round 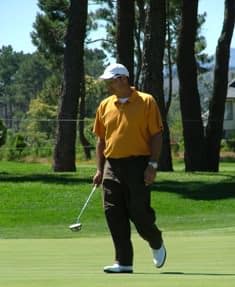 Ryan Dreyer produced another strong display of golf on Friday, in the second round of the 115th Argentine Amateur Championship match play, however it was not enough.

Playing Thomas Baik, of Argentina, the former South African amateur champion lost two and one in an enthralling encounter.

“I finished three under par after seventeen holes,” explained Dreyer after his round. “I played really well, but not enough.”

One of the world’s longest running Amateur Championships is being played at Highlands Park Country Club some forty five minutes outside Buenos Aires.

Baik birdied holes two and three to go two up. By the eighth hole Dreyer had pulled it all back to go level in the match. He lost the next hole to a birdie by the Argentine player.

The thirty eight year old Killarney Country Club amateur golfer missed a birdie putt on hole ten which would have put him back to all square.

He hung in gamely losing the twelfth to a birdie by Baik. However Dreyer won holes thirteen and fourteen to put the match back to all square.

Dreyer then lost hole fifteen to a par and watched Baik sink an eight metre putt for a win on hole sixteen, again he was now two down.

It was now all in Dreyer’s hands, he had to win the penultimate hole to stay in the game. Regretfully a par by the tenacious South African was only good enough for a half and the match went deservedly to Thomas Baik.

“This has been a great trip,” said Dreyer speaking in a telephonic interview after his round. “We met some really great people. It is my second trip here, like last year, I have really enjoyed it.”

Daniel Hammond, who was knocked out the match play on Thursday, and Dreyer return to South Africa on Monday.