BENONI (2 March 2009) – Former professional Ryan Dreyer signed for a second round of 71 to take the clubhouse lead in the stroke play qualifying tournament for this week’s Glacier SA Amateur Championship at Benoni Country Club on Monday.

Dreyer followed up his 66 with a round of three birdies and two bogeys to lead by one on seven under par, with the afternoon field still to complete their rounds.

Free Stater Dean Burmester, who is making his debut in this tournament, is Dreyer’s nearest challenger after the morning scores on six under, also after a 71. The top 64 players will advance to the main match play section of the championship, which begins on Tuesday.

But nobody is more surprised than Dreyer to be leading the stroke play tournament.

“I didn’t touch a club for two years, and this is quite a surprise,” said Dreyer, who walked away from life as a touring professional in 1996 and then was reinstated as an amateur at the beginning of this year.

He’s since finished third in the Central Gauteng Closed and 12th in the SA Amateur Stroke Play Championship at Pearl Valley.

“I was in Swaziland working until Saturday night, and then came out here on Sunday and shot 66. The putter worked well then. It wasn’t that good today, but I’m still pretty happy. 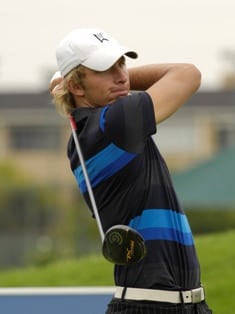 “I wasn’t even thinking about the stroke play actually. I mean, I’m out here playing as much golf as my work will allow me against these professional amateurs, so I was basically just trying to limit the damage in the stroke play and qualify for the match play. But now I’m pretty excited about the rest of the week.”

Werner van Niekerk, a member of the Ernie Els & Fancourt Foundation, took some advice from his father and a radio reporter and posted the low round of the day so far with a six under par 66.

Van Niekerk signed for a round of eight birdies and two bogeys to place him tied 12th in the clubhouse. It was a tremendous turnaround from his first round of 79.

“I wasn’t feeling too positive after that 79. Then I had a chat with my dad and he told me that no top golfer ever got anywhere with a negative attitude. He just told me to believe in myself more. Then when we drove to the course before the second round, and I heard a report on radio where the reporter was saying that at the top level in rugby, all the teams are basically the same, it’s just a question of who wants it more. I took that attitude to the golf course and it worked,” said the 18-year-old Van Niekerk, who is a former national under-14 champion and is currently ranked third on the under-18 national Order of Merit.