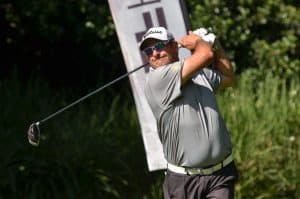 29 April 2021 – Eagle Canyon’s Ryan Dreyer raced two strokes clear of the chasing pack with his second consecutive round under par at the SA Mid-Amateur Championships at Devonvale Golf Estate on Thursday.

The 48-year-old has been in fine form this season.

He gave the younger generation a run for their money in the SA Amateur Championships in February, leading the first round of the Stroke Play Qualifier and making the Match Play field with a fourth place finish.

He won the Highveld mid-amateur tournament earlier this month and now he is looking to add the country’s premier Mid-Amateur title to his collection, having coming close in the past.

For the former South African Amateur champion, victory would ensure a unique double.

“It would means a helluva lot to win,” he said. “This may be my last amateur tournament here as I am planning on emigrating and I’ll be trying to qualify for the European Senior Tour when I turn 50.

“I came close before. I was fourth in 2014 and 2015, third in 2016 and lost in a play-off to Almero Theron at the Gary Player Country Club in 2017. Being the first player to win the SA Amateur and SA Mid-Amateur double would be very special.”

Despite the cold and blustery conditions at the Cape Winelands course, Dreyer got off to a strong start, with birdies at the par-five 11th and 17th holes, before a messy triple bogey on the difficult 18th hole derailed his progress.

“I played flawlessly for first eight holes, and apart from the birdies on the par fives, I must have given myself five other birdie chances inside 15 feet,” he said. “Then on 18 I hit it a little right, had some tree trouble and on my fifth shot I chipped it into the flagstick and it ricocheted back to 15 feet. I missed the putt and signed for seven.”

Seven straight pars followed before Dreyer signed off in style with an eagle two at the eighth hole and a birdie two at the ninth.

“The eighth was just a perfect yardage for me; 250 yards, slightly uphill with wind behind;” he explained. “I hit a great 3-wood that rolled out to eight feet for eagle.

“Then on the last I aimed for the heart of the green and the ball rolled out beautifully to about five feet. I’ve only ever made consecutive twos twice in my life before so that was quite something.”

The chasing pack includes plenty of big names, with No 1-ranked Mid-Amateur Jacques van Tonder in solo second on three-under after a round of level par 72 that included three birdies and three bogeys.

Four players are in a tie for third a further two shots back on 1 under.

Two-time champion Gerlou Roux of Bellville, who last won the championship in 2016, shot a round of 71 to join overnight leader Christopher van der Merwe (75) and Westlake pair Pietie Loubser (71) and Elton James (73) as the only players in red numbers.

The best round of the day – a six-under-par-66 – belonged to Erinvale’s Philip Taberer, who surged to joint 10th on one-over.

With the difficult conditions resulting in the cut coming at 14-over, a total of 67 players progressed to the final round and, with calm conditions expected for Friday, scoring should be good as players attempt to claim the biggest piece of silverware on the Mid-Amateur circuit.

“These guys behind me can really play and easily shoot five- or six-under, so I’ll just keep on doing what I’m doing and, at the end of the day, I hope I can post a number that is enough to win,” said Dreyer.