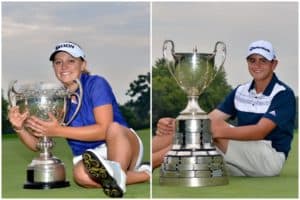 21 February 2020 – Not even a two-hour delay due to dangerous weather could halt the relentless charge of South Africa’s two top-ranked golfers – Caitlyn Macnab and Casey Jarvis – towards their place in golf history.

Astonishingly, in the first year that the women’s and men’s championships were played in the same week and at the same course, the extra-ordinary Ekurhuleni pair added to an even rarer piece of history.

Jarvis became the youngest champion in history of the SA Stroke Play Championship with his nine-stroke runaway victory at Randpark Golf Club a week ago and on Friday, the 16-year-old State Mines golfer ended the run of Scotland’s James Wilson with a comfortable 7&6 victory on Royal Johannesburg & Kensington’s East Course.

Jarvis is the 10th double winner since the SA Amateur Championship switched to a match play format in 1925. 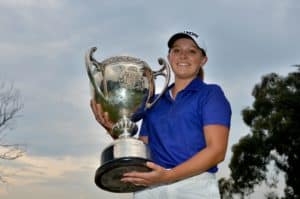 Macnab was a huge favourite to win the final as the number one ranked woman golfer in South Africa, but surprisingly she fell behind early to Van Kan.

“I think I was half asleep on the first nine,” she said. “I hit one green in the first seven holes and short-sided myself on the ones that I missed. Kyra was playing steady and all of a sudden I was 3 down, so I had to work really hard to get it back.

She was two down after the first 18 holes but fought back and turned the match around, winning with a par on the 15th hole.

“It feels awesome,” Macnab said. “To win one of these events is really special so to win both in the same year is just amazing. This is two big items ticked off the bucket list, so I guess I’ll need to reset a few goals this year.”

She had some words of encouragement for Van Kan, who was bidding to break Ashleigh Simon’s record as the youngest ever winner of the Aon SA Amateur Championship.

“I am so impressed by how Kyra carried herself and how she played the entire week,” said Macnab. “She’s done incredibly well and she’s really announced herself as someone to look out for in the future.” 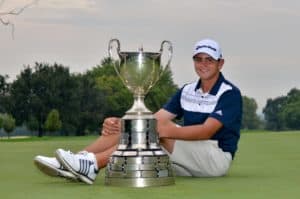 Sixteen-year-old Jarvis was delighted to have added the title to his impressive resume.

“I’m a bit lost for words at the moment,” he said. “I was mentally tired after last week, so to come here and manage to get the win is something that I’m extremely proud of.

His dominance was built around five birdies in the last six holes of the first 18 holes.

“I made some good putts coming down the stretch that gave me a 4-up lead at the turn,” he said. “It allowed me to play freely on the second round and after I won the 19th and 20th to go 6-up, I felt I could play a bit safer. I knew I couldn’t relax because James is a very good player, so I stuck to my game plan, I just didn’t attack the pins.”

This year marked the first time in the history of the event that the men’s and women’s championships were played simultaneously and the players enjoyed the experience tremendously.

“Having Aon as a sponsor has been incredible,” said Macnab. “The branding, the look and the feel of the championship was completely different. They have really lifted the scale of the event and we can feel it, especially on the women’s side. It felt like a professional golf tournament, like when you go to the South African Open.

“Sharing the championship with the men has been great. The vibe was fantastic, even if we sometimes bumped elbows on the putting green. It was great to go and cheer the guys on in their qualifier, and then to see them return the favour and support us in the SA Stroke Play final. The vibe has been good and we’ve all cheered each other on.”

Jarvis was equally impressed by the new format of the tournament, which will stay at Royal Johannesburg & Kensington for the next two years.

“It’s a lot of fun playing with the women and they really made the week more special. We loved playing here at Royal Johannesburg and Kensington. To play top courses in the Aon SA Amateur was such a privilege and we are really excited to know that we are coming back next year.” 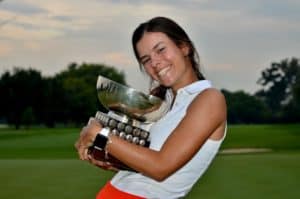 Ladina Semadeni from Switzerland claimed her first amateur victory when she defeated Boland junior Ineke Brynard 2-up for the Flight Division title. “I am so excited that I decided to come and compete in South Africa,” gushed the Swiss miss.

“Ineke was a great opponent and it was a very tight match. I drove the ball really well, but my putting wasn’t so great and I had to really scramble at times. I’m so proud that I won, because this is my first win and it feels great. I enjoyed this week very much. GolfRSA and Royal Johannesburg did a great job and it was very cool to have both championships here together.”

Written and released by Brendan Barratt and Lali Stander on behalf of GolfRSA.