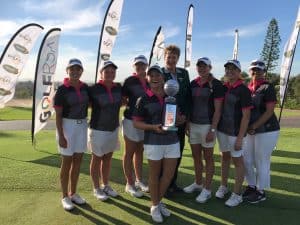 STELLENBOSCH, 5 October 2018 – The underdogs won the day in a dramatic finale at Devonvale Golf and Wine Estate as Ekurhuleni and Mpumalanga both celebrated double firsts in the 58th SA Women’s Inter-Provincial Championship on Friday.

Ekurhuleni defeated defending champions Western Province 6.5 – 2.5 in a pressure-packed final round to lift the A-Section title for the first time and Mpumalanga held Border to a draw to win the B-Section and the coveted promotion that comes with the trophy.

Ekurhuleni and Western Province began the last day tied on 4 points after two wins each.

Caitlyn Macnab issued a simple instruction as she led her charges into battle against the crowd favourites. “I told them to win everything,” said the 16-year-old Serengeti junior.

“We were 1 games point behind Western Province, so I told them to go out hard and fast and win everything because one point could make the difference at the end of the day.”

The team responded with a resounding 3 – 0 lead in the foursomes.

“There was a huge sense of anticipation after the foursomes,” said Macnab. “Weonly needed to win three games and we knew we could do it. Everyone was committed to get the job done.”

Van der Westhuizen knocked out Katia Shaff 5 & 3 to take their tally to 5 points, but Western Province banker Zayb Fredericks downed Lubbe 2-up to give her team a fighting chance.

Williams defeated Macnab 3 & 1 and seasoned campaigner Kelly Erasmus halved against Van Kan to take Western Province’s tally to 3 points, but it was too little, too late.

Jordan Rothman took Floyd to the final hole, but the 14-year-old sealed the deal when she holed her par putt to win 1-up.

“This has been one big team effort,” said Macnab. “There is no I in team. We bat for each other and we play for Ekurhuleni. I want to applaud all our players, especially our rookies Kyra and Nadia, for their fighting spirit and their never-say-die attitude. This is a team competition and this was a team victory.

“Our president Susan Andrew and our manager Lizette Vermaak have been incredible in their support and we are extremely proud that we could repay their belief in us with this achievement.

“We would also like to congratulate Devonvale on giving us a pristine golf course for this year’s championship. Our gratitude also goes out the green staff, the waiters and waitresses and all the staff that serviced the player accommodation.

“And finally, a big thank you to Womens Golf South Africa and all the executives for all the long hours this week. We had a fantastic championship.” 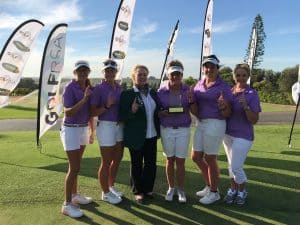 Mpumalanga not only won the B-Section Seeding, but went all the way to win the coveted promotion in the 58th SA Women’s Inter-Provincial Championship with an unbeaten performance at Devonvale Golf and Wine Estate; credit GolfRSA.

Meanwhile Mpumalanga already had cause for celebration after finishing in the top draw after the 36-hole Seeding Round.

“Our goal this year was to make the top draw for the first time,” said captain Patrizia Lombard. “Once we made the top four teams in the seeding round, we moved the goal posts. If we were good enough to win and get into the top draw, we could win the whole thing.”

“We had a 2 point lead over Border, but they are a tough side with a lot of experience, so we took nothing for granted,” said Lombard. “We split the difference in the foursomes, and Chante Boonstra and Petrone Rudolph pulled it through for us in the singles to force a 3-all draw.

“We are absolutely over the moon. We worked very hard leading up to the SA Women’s IPT and now we have an even bigger goal. Next year we want to prove to everyone that we belong in the A-Section. We recently got a new coach and we have earmarked some youngsters to work with for our six-man team next year. This has been an unbelievable week for us, playing a fantastic course against top opposition and we are incredibly proud to be leaving Boland as the 2018 champions.”

In the other A-Section Division 1 match, Gauteng defeated Southern Cape 5 – 4 to take third in log.

Last year’s B-Section winners KwaZulu-Natal won the Division 2 with a win against Boland and a final round draw against Gauteng North. Boland also defeated the Daisies, which left Gauteng North holding the wooden spoon.

Western Province B beat Free State 4 – 2 to finish second in the B-Section Division 1 log, while North West came up trumps in the Division 2 battle. The team defeated Eastern Province 5 – 1 in the final round to edge out Northern Cape for the top spot with 1.5 games points.