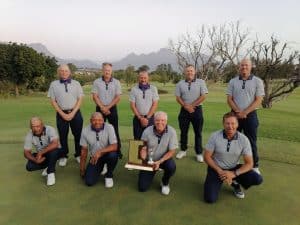 24 April 2021 – The Western Province Senior force produced an extra-ordinary effort on the final day of the 2021 SA Senior A-Division Inter-Provincial to power their way to double victory at Stellenbosch Golf Club on Friday.

Western Province had gunned to the top of the log on 10 points with two convincing 7 – 1 wins on the third day of this year’s tournament and the eight-strong squad dug even deeper to come up trumps in an intense final round.

Central Gauteng – targeting their fifth successive title – was in second with 9 points and, on paper, the team to beat, but it was Gauteng North that delivered the stunning blows in their three-way clash.

“We expected a proper battle with Central Gauteng, but the Daisies saved their best for the final day, and really turned up the pressure,” said Western Province manager Mike de Swardt. “We had our backs to the wall all day, but the way our boys stood up and grinded out the win was a true testament to our team spirit and their never-say-die attitude.”

Ralph Fransman and Jonathan Bernard – playing at No. 8 and No. 7 respectively – banked the first crucial wins for Western Province against both opponents.

Fransman shot 69 to beat Jock Wellington from Central by seven strokes and he bagged another games point against Michael Cullen from Gauteng North, while Bernard carded 73 to edge Schalk Naude from Central and Gauteng North’s Maartin Boshoff.

Mark Louw lost both his games, but Craig Poulton at No. 5 produced a 75 to beat Sean Quigly by one shot, taking his team’s tally to 3 – 1 against Central Gauteng.

Needing just one more win to force a draw with the defending champions, the man who produced the game-changing wins was reigning WP Senior Masters champion Greg Woodbridge.

Playing at No 4, the Atlantic Beach Links senior fired a 66 that bested Gerhard Strydom from Gauteng North’s 70 by four shots. Woodbridge also beat Neil Homann by five strokes to force a draw.

“It was a really intense final round, so to walk off the course the 2021 champions means the world to all of us,” De Swardt said.

“I could not be prouder of the guys. We selected this guys two years ago for the 2020 IPT that was cancelled due to Covid-19. They all put a tremendous effort into their preparation for this week and they really left it all out there. 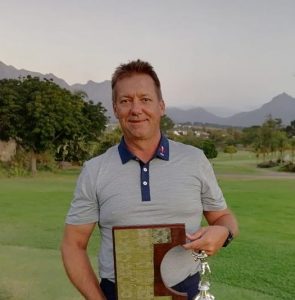 “Every man on the side contributed to this memorable victory. Their team spirit and their fighting attitude was incredible and they truly earned this achievement. Congratulations to Greg, our captain, on his leadership. He kept the guys on side and their focus on the positive outcomes.

“On behalf of all the players, I would like to congratulate GolfRSA and Boland Golf Union on a fantastic tournament. The concessions that had to be made to enable the SA Senior IPTs to proceed were both well considered and very well managed.

“A huge thank you from all of us also goes out to Louis Destroo and his entire team at Stellenbosch Golf Club. We applaud the green-staff tireless efforts to present us with a pristine course and to keep it in top shape for the week and the club staff for their great service.”

The relegation battle was also cloaked in drama and had to be decided in a sudden-death play-off by two nominated players after Eastern Province and Border tied on points and game points. Attie Burger from Eastern Province defeated Jakkie Visagie with a par on the second play-off hole to send Border down to the B-Division. 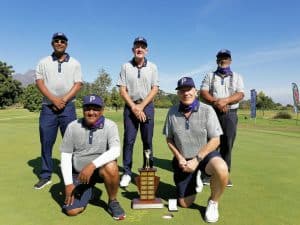 The quartet scored 8 points to win by 1, demoting Central Gauteng to second on 7 points and 10 games points after the side drew 2-all draw against KwaZulu-Natal.

“It was a must win situation for our guys and they really stood up to the counted,” said De Swart. “Brian Mampies used to be one of our WP Senior side anchors and he made a great debut for the team, shooting two-under 70 to beat Southern Cape’s umber one Bertus Smit on day one and setting the tone for the week.

“Our captain Henry, Herman and Richard were solid bankers, as always, with Henry shooting a superb 69 on the final day to seal the deal. It was a tremendous team effort to pull this through and the guys were absolute credit to the union.

“I would also like to commend Rashaad van Niekerk on doing a tremendous job handling the team in his first appearance as a team manager.”