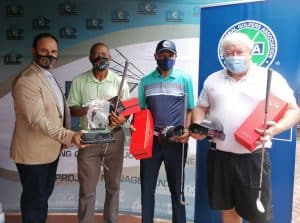 18 December 2020 – Ivano Ficalbi reeled in a trio of birdies over the five closing holes at Mbombela Golf Club on Tuesday to seal a successful title defence in the PGA National Pro-Am hosted by Darren Plumb.

The Chief Executive of the Professional Golfers Association of South Africa had swapped his desk for a set of clubs and joined members of the organisation in the season-finale showpiece in Mpumalanga.

The pay-off was a two-point victory and bragging rights for the next 12 months.

The Royal Johannesburg and Kensington Golf Club member shot rounds of 70, 69 and 69 and claimed the title on a winning score of 113 points in the Individual Stableford competition.

In the Team Competition, local heroes Herman, Jaco and Stephan Potgieter and their professional, PGA of SA coach Ben Fouchee, looked set to take the glory.

Playing a fourball alliance with 2 scores to count on all holes with the three amateurs playing off 85% of handicap, the Mbombela trio made the most of their home course advantage on the final day to fire an 83 and set the clubhouse target on 256. 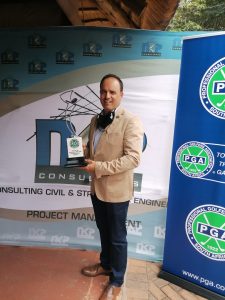 But Ficalbi’s team spoiled their party.

Having carded earlier rounds of 87 and 83, Ficalbi, Chalmers Pagiwa, Kerneels Kruger and Nic Elliot signed off with an 86 in the final round to force their way into a share of the lead and the quartet celebrated victory on a count-out.

“It was a highly competitive and entertaining three days at Mbombela Golf Club and I don’t think we could have closed out this difficult year on a higher note than with the PGA National Pro-Am hosted by Darren Plumb.

“Like most of the industries in South Africa, the golf industry and everyone involved with golf took immense emotional and financial strain  beating during the nationwide Covid-19 lockdown, Thanks to the hard work done by GolfRSA in collaboration with ourselves and the Club Managers Association of South Africa, we were able to get golf courses re-opened in June. Since then, the game has seen a resurgence and the PGA members have been instrumental in the safety and success to date.

“It was really fantastic to host this event despite the economic hardships and hats off to Mbombela Golf Club General Manager Darren Plumb, who secured Vodacom and NKP as sponsors and presented us with a great golf course.

“Despite the ongoing drought, the green staff did an amazing job and presented us with immaculate tees and greens. The course received high praise from all the participants and as always, the service was of the highest standard. Nothing beats those stunning views from the terrace and we applaud Mbombela Golf Club and Darren for hosting a highly successful event.”

Plumb was delighted with the positive feedback.

“It was another enjoyable and memorable event, for the 2020 PGA of SA and Mbombela Golf Club National Pro-Am,” he said. “With the dry, hot conditions, there was plenty of run out on the fairways, which made for good scoring.

“On behalf of the Management Committee, members and staff it was an honour to host my fellow PGA professionals as well as their team of amateurs. Congrats must go to Ivano who came back and successfully defended his title with some great golf on the last day to some tricky flag positions. Well done to all the players that featured in the team prizes.

“I want to thank our title sponsors, NKP Consultants and Vodacom, without whom we would not be able to showcase this event. And to all other partners who contributed, we thank you for your support in this event and throughout the year.

“I trust all the players had the #UltimateBushveldGolfingExperience and we hope to see you partake again in 2021. I wish you all a blessed festive season and happy good golfing for the New Year. Stay Safe.”

For further information, kindly contact Ivana Ficalbi (Chief Executive of the PGA of South Africa) on 011 485 1370 or email ivano@pga.co.za.