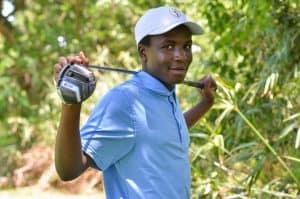 14 September 2020 – When Thami Ngobeni hit his first golf ball on a football field on Riverside Farm back nearly seven years ago, he didn’t have visions of Augusta or even nearby Leopard Creek.

The Mpumalanga junior was just beginning his journey with the South African Golf Development Board (SAGDB) and he had no real idea what the world of golf had to offer.

“All I thought about was hitting that ball,” said Ngobeni.

“But today, I can dream about teeing it up in the Alfred Dunhill Championship in a few years. I can imagine driving down the famous Magnolia Lane. They may still be far in the future, but I inch closer to those goals with every drive.”

Just before the nationwide lockdown in March, Ngobeni celebrated his first-ever visit to the winner’s circle when he won the Middelburg Junior Open.

The boost of confidence the victory delivered encouraged the young Mpumalanga talent during all the months away from the golf course.

“Thami kept up his practice drills at home and, as soon as golf re-opened in June, he was back out there and working harder than ever,” said SAGDB Mpumalanga Development Manager Edwin Compton. “And it paid off.”

In his first competitive start post lockdown, Ngobeni won the Mbombela Junior Open by one shot from Middelburg’s Zane Nel a winning score of three-over-par 74.

Having started with a double bogey at the par four opening hole, Ngobeni racked up a trio of birdies from the third and overturned a bogey at the sixth with a birdie to turn one-under.

“My coach always tells us to stay in the moment and I did that. I stayed calm and I focused on the next shot. You can’t change what already happened, but you can control what you do next. It was a great feeling sinking the winning putt. Winning has really motivated me and I just want to keep on working hard and improving my game.”

Launched by businessman Johann Rupert in 1999, whose vision was to use golf as a powerful vehicle for change, the SAGDB aims to build the nations’ golf skills, to grow the sport and to eventually produce champion golfers from all walks of life in disadvantaged communities.

More than 30 000 players have come through the grass-roots programme in the last 20 years.

“We have seen over 200 earn provincial colours on merit,” Compton said. “More than 1 500 players participated in national and provincial junior golf tournaments and 34 of our most talented players have been invited to join prestigious and recognised academies such as the Tuks High Performance Centre and the Ernie Els & Fancourt Foundation.

“And three of our amateurs have represented South Africa, including Cole Stevens who competed in the 2018 Youth Olympics in Argentina.

“Thanks to the generosity of Mr and Mrs Rupert we have access to a world-class practice facility in the National Junior Development Centre, where we can coach the children in the programme and I believe we are soon going to produce national champions at our chapter.”

The facility was constructed on a 30-hectare tract of land purchased from Riverside Farm and the original farmhouse was converted into a dormitory building that will house golf squads from GolfRSA.

“Through Mrs Rupert’s annual Ladies Invitational funding, we were able to build a clubhouse for our children on Riverside Farm where they live,” Compton said. “It serves as their own space where they study and keep all their many trophies.

“We are really starting to witness the fruits of our labour in players like Thami. In the last year, he has risen to third in the Mpumalanga Golf Union’s Junior Rankings. He was selected to the Mpumalanga junior team for the 2019 South Africa Under-19 Inter-Provincial on merit and he represented the province in the SAGDB Motus Team Challenge at Royal Johannesburg & Kensington last year.

“He is such a gritty and determined young man and if he can keep on improving, I believe Thami will be our first number one ranked SAGDB player on the Mpumalanga Junior Order of Merit. I have no doubt that he will work hard to achieve that goal and his achievements really motivates the younger learners.

“We have just over 200 children in six different areas in the programme here in Mpumalanga, and golf has really changed their lives. We don’t just see them improve as golfers, but as human beings as well. The discipline of golf improves their school work and other areas of their life.

“Ultimately we want to produce golfers that will compete on the pro circuit, and there is no doubt in my mind that we have a crop of rising talent here in Mpumalanga that could go really far in the game.”

For Ngobeni, the future is clear.

“I still have a lot of work ahead, but I know that I want to make a living on the golf course. It will take a lot of hard work and commitment, but I am up for the challenge. I am so grateful for the day that the SAGDB stuck a club in my hand. It changed my life forever.”