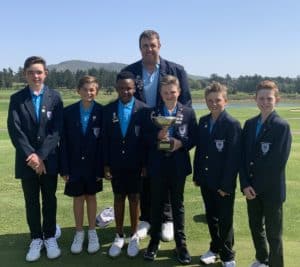 Gauteng North led from start to finish to celebrated a successful title defence with an 18-shot victory in the 2019 Nomads SA Under-13 Championship at Devonvale Golf and Wine Estate; credit GolfRSA.

27 September 2019 – Defending champions Gauteng North led from start to finish at Devonvale Golf and Wine Estate to celebrate a  second uncontested victory in the Nomads SA Under-13 Championship while team member Dujuan Snyman won back-to-back in the Individual Competition.

Twelve months after the Daisies revelled in a 24-stroke triumph at Koro Creek Bushveld Golf, they proved equally untouchable as they marched to an 18-shot victory.

In the final round, rookies Dian Kruger and Ross Campbell matched team-mate and individual competition leader Dujuan Snyman with rounds of one-over-par 73. Roelof Craig posted a two-over 74 and Ben van Wyk added 80 to for a final round 373 and a winning total of 1108.

“I am extremely proud of the team,” said delighted team manager Morne Engelbrecht. “It’s a very big stage for the youngsters and our first-timers showed huge heart.

“We had a nervy start in the final round with a couple of bogeys, but they settled down. It didn’t matter that we had quite a big lead. Every player made a contribution and they fought for every single shot out there as if our challengers were right on our heels. 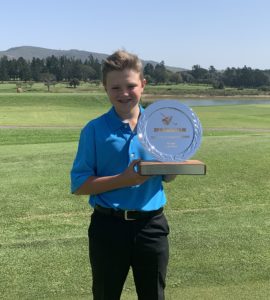 “We are incredibly proud of our anchor, Dujuan, who won the Individual Competition for a second year running, but this is a team event, and every other guy on the team did his part. Roelof, Ross and Dian all had their best rounds of the week on the last day.

“Our youngest player Ben had a terrible start, but he never stopped fighting and I’m so pleased that his score counted for team today. Zinan (Maimane) was disappointed with an 81 in the final round, but he put his hand up for the team on the first two days. We had a really fantastic title defence and it was complete a group effort.

“I want to applaud the staff, green staff and hotel staff on giving us a five-star experience this week and for making this a very memorable event for our rookies. Also, a heartfelt thank you to Nomads for putting on this incredible week for the future stars of South Africa to wet their feet in a proper national championship. Finally, thanks to tournament director David Younge and GolfRSA for a very well organised event.”

Snyman from Woodhill shot to the top spot of the leaderboard with a blistering seven-under-par 65 on day one. He kept his title defence on track with an even-par 72 in the second round and closed out a four-shot victory on six-under 216 with a final round 73.