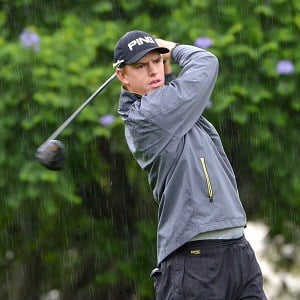 James du Preez has a seven-shot lead heading into the final round of the African Amateur Stroke Play Championship at Glendower Golf Club; credit Ernest Blignault.

15 February 2018 – James du Preez charged to a seven-shot lead heading into the final round of the African Amateur Stroke Play Championship after a roller coaster day at Glendower Golf Club.

The Pretoria golfer fired a flawless eight-under-par 64 in a round that ran to almost seven hours due to a weather suspension of two hours and 20 minutes.

Du Preez entered round three one shot behind South Africa’s David McIntyre, Yashas Chandra from India and Frenchman Edgar Catherine at six-under, but quickly wiped out the deficit with an eagle at the par five second to hit the front.

A birdie at the par five eighth after the delay kept him in front and a strong finish with five birdies in his last seven holes saw him finish with a 13 under par total.

Fellow South African Martin Vorster reeled in three birdies on the trot from 13 and parred the final three holes for a 68 that earned him a share of second. The 18-year-old Southern Cape golfer tied with Irishman Coalan Rafferty, who returned a 69.

Reigning Sanlam SA Amateur champion Christo Lamprecht matched Vorster’s 68 to tie for fourth with Alex Gleeson on five under. The Castle Golf Club player had a tumultuous front nine, but birdies at 14 and 15 got Gleeson back in red numbers and he closed with a 71.

The last time Du Preez entered the winner’s circle was in April two years ago, but he felt his game was coming into winning form again during the South African Stroke Play Championship last week.

“I just felt really good off the tee and the short game was getting better throughout the tournament,” he said of his top five finish at Pecanwood “It’s been a long road back from injury, so I didn’t arrive here with huge expectations, but I felt I could put together four decent rounds.”

After boxing a three-footer for eagle at the second, Du Preez parred the next four holes.

“The siren blew and most of the guys were worried about whether we’d go out again, but I just chilled out and didn’t think about it too much,” Du Preez said. “It really came down hard. We couldn’t even see the fairway at the second hole from the tee.

“It was still coming down when we restarted and I just stayed patient. The course drained incredibly well, but the greens were very receptive. If you took the right route off the tee, you could score.”

The HPC Tuks Golf Academies player hit a 4-iron pin-high right at 12 and made a great up-and-down for birdie to set the ball rolling on the back nine.

“I birdied 13 and 15 and I wanted to get one more birdie down the last three holes to give myself a really good cushion,” he said. “I hit driver down the middle and had 90 metres in, I took sand-wedge and left myself a 12-footer and boxed it for birdie. At 18, my tee shot finished a fraction off the fairway right, but I hit my approach to 12 foot and holed the putt.

“It’s golf, so you can’t get your expectations up too high. You never know what will happen. I could keep it going; someone else could hit a hot run. It’s just important to stay in your own game and stick to your process.” 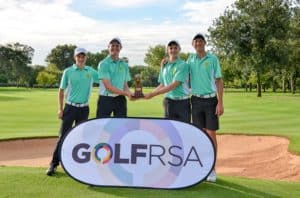 There was celebrations all-round for the SA Junior Team, who edged out Ireland 1 for the honours in the 54-hole Team Competition.

Rounds of 68 from Vorster and Lamprecht, supported by a 73 from Wilco Nienaber saw the youngsters triumph on 18-under. Ireland 1 finished four shots back, France took third on six-under and the SA National Team finished in fourth on one under.