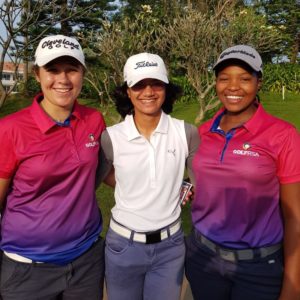 23 December 2017 – Danielle du Toit reached the final of the All India Ladies Amateur Championship in Bangalore, India on Saturday, showing great courage under fire and the conviction to win.

The 18-year-old South African was relentlessly tested by Rhea Purvi Saravanan from India, but Du Toit prevailed to take the match 4 & 2 at the Eagleton Golf Resort course.

“Danielle had four birdies and only two bogeys, but the match was a lot closer than the score-line suggests and it was a tough match to win,” said Womens Golf South Africa president Sally Greasley.

“One of the tournament directors described Rhea as the “dark horse of the tournament” and she certainly lived up to her legend. She may not be in the Indian Junior Squad yet, but I am sure after her performance in this tournament she will strongly considered.”

Du Toit hit a good drive at the first, but found a deep bunker with her second. She splashed out of the trap, missed the birdie putt, but holed the second to halve the hole. She hit another solid drive at the second and birdied the hole to go 1-up.

“They halved the third, but Danielle’s drive at the fourth found a hole on the wrong side of the cart path and she had to take a penalty drop,” Greasley explained.

“Rhea was on the green in two and Danielle missed a long putt to halve. They went to the fifth all square, but Danielle hit a great tee shot into the par three and holed a superb putt for birdie to go 1-up again.

“At seven, Danielle’s drive veered a little left. She missed the bunker with her second, but her approach found the upslope. Rhea was on the green in two. After a poor chip from Danielle, Rhea holed her putt to square the match again.

“Rhea’s tee shot into the par-three ninth flew the pin and settled at the back of the green, leaving her with a very tricky downhill putt. Danielle’s tee shot found the upslope again, but this time she chipped it stiff. Rhea’s first putt finished short. Her second putt went past the pin and she conceded the putt.”

“They halved the par three 12th and both left themselves with very long birdie putts at 13,” said Greasley. “Rhea missed her birdie putt, but Danielle’s birdie attempt found the bottom of the cup, stunning the spectators and delighting Zethu (Myeki) and me.

“Danielle was 3-up with five to play. Rhea rallied with a superb birdie putt at 14, but Danielle responded with a great bunker shot at 15 and a birdie putt to go 3-up again. At the 16th, Rhea’s tee shot finished in the hazard and, although she was able to get a club to it, she only moved the ball a few metres. Her third shot landed on the upslope just outside the bunker and she failed to reach the green with her chip.

“Danielle drove it straight down the middle and left her second just short of the green. At this point, Rhea conceded the hole and Danielle celebrated reaching her first international final. The match swung back and forth, but Danielle showed incredible determination to reach the final.

“She achieved it with a bit of room to spare by once again playing sensible golf, although she admitted after the match that she had to take a couple of deep breaths as Rhea got herself out of trouble with some great shots.

“Danielle will face Ashley Lau Jen Wen from Malaysia in the 36-hole final. I am sure the Indian Golf Union is disappointed not to have one of their players in the final, but nonetheless the support has been fantastic and I’m sure we will have great support for the 36-hole final. One thing is certain, whoever wins, celebrates Christmas early!”