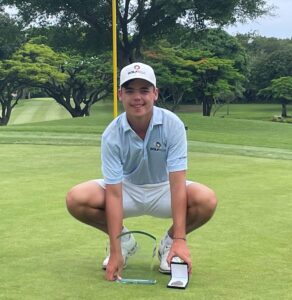 Victorious Jaden Deltel from the GolfRSA National Squad celebrates his first Under-19 victory in the Pawpa Sewgolum Cup in association with Nomads at Selborne Golf Club; credit GolfRSA.

13 January 2022 – GolfRSA National Squad member Jaden Deltel captured his first under-19 title when he defeated Pascal Gunther in a play-off to win the Papwa Sewgolum Cup in association with Nomads at Selborne Golf Club this January.

The 17-year-old Gauteng junior fired a final round 70 to set the clubhouse target at three-under-par 213, but Pascal forced the tournament into overtime with a superb up-and-down birdie on the final hole, a driveable par four.

The Bryanston Country Club pair both made par on the first extra hole, but on the second trip down the 18th, Deltel took control. He split the fairway with his tee shot, pitched his approach three feet from the hole and held his nerve to box the winning putt.

“It feels amazing to get my first under-19 win under belt,” a delighted Deltel said. “You know, it was a tough day out there and I just had to grind it out to the end.”

The Seychelles-born Deltel enjoyed his first success on South African soil shortly after the family settled in South Africa when he won the 2018 Sun City U-15 Challenge at the Gary Player Country Club.

A growth spurt forced him to make several adjustments to his swing, but the changes began to pay off last year and he demonstrated his great potential at the end of season with a runner-up finish in the Bobby Locke Invitational and top four finishes in the Nomads SA Boys U-17 Championship, the Dimension Data U-19 Junior Open and the Harry Oppenheimer Trophy. He also finished the local Central Gauteng Junior circuit strong with a winning performance in the season-ending Junior CGGU Festive Tour at Parkview Golf Club.

Deltel carded rounds of 71 and 72 to start the final round four shots behind 36-hole leader Astin Wade. A birdie, eagle start boosted him up the leaderboard, and he took the outright lead with a birdie on 13, but an untimely double on the par-four 17th opened the door for Gunther to pounce.

“The biggest thing for me today was keeping my focus,” he said.

“It was very hot and humid, but I grew up playing golf in conditions like this in Seychelles, so I just made sure I kept hydrated and kept my energy up. Pascal played great golf, especially on the final day and I knew there was a chance of a play-off after the double on 17. Once we were in for extra holes, I knew I would need a birdie to win. When I got the chance, I took it.

“I can’t say how much this means to me. This win is a big encouragement early in the season. I want to thank my family, GolfRSA and everyone else who supports me. I am really grateful for their faith in me.”

Umhlali’s Wade finished in a four-way tie for third on two-under-par 214, alongside GolfRSA National Squad trio Marno Lange, Christopher Bagnall and Fabrizio de Abreu, whose final round 67 tied Divan Mostert and Timothy Daniels for the low round honour on the final day.