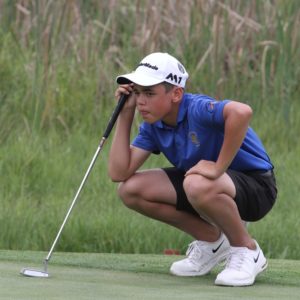 3 April 2018 – Bryanston junior Jaden Deltel reeled in half-a-dozen birdies as he motored into the first round lead in the Gowrie SA U-15 Challenge in the heart of the KwaZulu-Natal Midlands on Tuesday.

With a comfortable two shot cushion, Deltel might be tough to catch.

The youngster joined Central Gauteng Golf Union in the middle of last year, but he is no stranger to the winner’s circle, having won several big titles in the Seychelles, where he honed his craft.

Deltel was only nine when he won the Sainte Anne Resort and Spa Open Golf Tournament at the Seychelles Golf Club in 2014, beating 38 adult golfers a winning net score of nine-under-par 59.

A year later, he scooped 50 adult golfers to claim the net prize in the MCB Contance Lemuria Golf Competition at the Praslin and Mahe Golf Courses, which also qualified him to compete in the MCB Tour Championship, which forms part of the European Senior Tour.

Deltel leads by two strokes from Dylan Melville from Southern Cape, the only other golfer to break par on day one.

“The course is absolutely pristine, with fantastic fairways and the greens running at 10.5 on the stimp,” said tournament director David Younge. “The course has some rain, so it was playing slightly long, but the conditions were really ideal for the field in the morning. The afternoon field played in a one-club wind.

“Although the course has had some rain in the past week and was playing a bit long, we didn’t see the need to have placing, but we set it up a shorter to compensate for the length. I do envision the course set-up getting tougher as the tournament progresses.”

Central Gauteng’s Herman du Plessis finished birdie-par for an even-par 71 that earned him a share of third with Rorisang Nkosi from North West, who offset a bogey at 10 with a pair of birdies at 13 and 14 and seven straight pars over the back nine.

A birdie at the closing hole for a one-over 72 saw Christopher Bagnall from Ekurhuleni to tie for fifth with reigning Randfontein club champion Hannes Strooh from Central Gauteng.