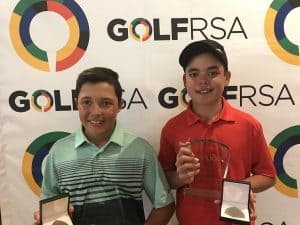 12 July 2018 – Bryanston junior Jaden Deltel claimed a two stroke victory in the Sun City Under-15 Challenge, while Fabrizio de Abreu beat fellow Woodhill golfer Dujuan Snyman by five strokes for the Under-13 title at the home of the Nedbank Golf Challenge on Thursday.

Buoyed by a top 20 finish in the recent Nomads SA Boys Under-17 Championship, 13-year-old Jaden Deltel laid down an early marker for his first national victory with an opening round one-under 71.

The Gauteng golfer led by one shot from Rori Nkosi, who also brought some red-hot form to Sun City after following a top 10 finish in the Himbara World Junior Golf Championships with a tie for fourth in the Dimension Data Junior Open Under-15 Challenge.

Luc Gavagnin from Woodhill and Ockert Brits from Goldfields West were a further shot back.

Brits closed the gap to just one shot with a birdie at the first when Deltel three-putted the opening hole, but the Bryanston Country Club junior was back in control after a birdie at the par-four fifth. A well-executed birdie at nine cancelled another drop at eight and Deltel headed into the back nine still leading the chasing pack. 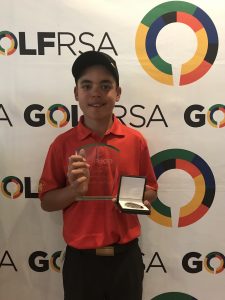 “I pitched sand-wedge from the middle of the fairway pin high left at the fifth and made a 20-footer for birdie,” said Deltel. “At the ninth, I hit my driver down the middle and laid up short of the water with an 8-iron. I hit pitching wedge into the pin at the top left and holed a 10-footer for birdie.”

Gavagnin stayed in touch with birdies at two, four and six, but Brits and Nkosi slipped from contention.

Deltel moved to two-under with a further gain at 11, but immediately lost the advantage when he three-putted the 13th hole. When Gavagnin eagled the par five 14th to tie for the lead, Deltel showed his capacity to perform under pressure.

“The last three holes, especially, are tough closing holes and I’m really pleased with how I kept my composure. The course set-up was tough over the two rounds. There was a lot of tucked pins, but the greens rolled great, so if you hit it to the right side of the hole, you could score. My best shot of the final round was the gap-wedge I hit straight into the pumping wind and stuck to three feet from the flag at the 11th hole.

“I want to thank my coaches Gavan Levenson and Bernard van der Meersberg for their guidance and my parents for their support, especially my dad, who gives up his free time to practice with me. And I want to dedicate my first national title to my sister Kayla. It was her birthday on Wednesday, but she had to stay home to study for exams, so we all missed it. This is for you, Kayla.”

Dimension Data Junior Open Under-15 Challenge winner Amilkar Bhana rocketed to fourth on four-over with a final round 73 and Hannes Strooh rounded out the top five on 150 after posting 72. 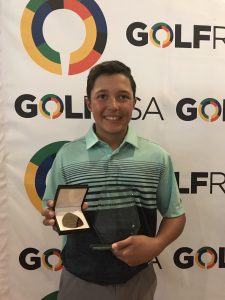 The 12-year-old opened with a 79 to tie Dujuan Snyman for second and the Woodhill pair began the final round one shot behind Tyron Groenveld from Serengeti.

“I dropped four shots between the fourth and seventh holes, but then I made 11 straight pars to win,” said the Woodhill College learner. “That was key to my round, because the course was playing really tough in the wind. I had a few close calls, but I managed to save par and keep the lead.”

De Abreu has enjoyed plenty success on the SA Kids circuit and at his home union, but he was delighted to bag his first national title.

“This is such a tough course and the set-up was brutal at times, especially in the wind,” said Deltel. incredibly hard with my coach Bradley (Nienaber) at the HPC Tuks Golf Academy and it’s a great feeling to be rewarded for never giving up.”

Snyman closed with an 81 to finish second, one shot ahead of Marno Lange and two clear of Groenveld. Lange closed with a 78 and fellow Serengeti junior Groenveld carded an 84. Reinhardt Uys, also from Serengeti, posted rounds of 83 and 84 to finish in fifth on 167.