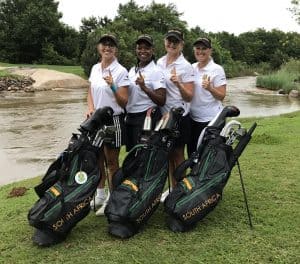 2 March 2019 – Team South Africa made a strong start in their title defence at the Regional All-Africa Challenge Trophy (RAACT) at the Nkonyeni Lodge and Golf Estate in Eswatini on Tuesday.

New cap Larissa du Preez and Sarah Bouch, a member of the victorious 2017 team, combined for a first round total of 143 at the par 71 course.

The defending champions opened up a 20-stroke lead over the host nation. Zimbabwe finished six strokes further adrift in third place, with Namibia fourth on 179.

Du Preez from Silver Lakes, who is studying a degree in general club management, was delighted to post an even-par 71 in her debut for South Africa.

“I drove it really well today and that was definitely the strength of my game today,” said the Ernie Els and Fancourt Foundation member. “I struggled a bit from 100 metre out and my shorter wedge shots were not that great, but my greens in regulation percentage wasn’t too bad.

Du Preez turned one over after a bogey-birdie combination at the third and fourth holes. She birdied the 10th to get back to level and offset another dropped shot at the par three 11th with a brace of gains at the 13th and 14th holes.

“I found the greens incredibly slow and battled to get the pace right. I left some of the shorter putts too short, but I capitalised on the slow speed with the longer putts. I was happy to get a couple of birdies on my card and feel positive about the rest of the tournament. I just need to focus a bit harder on my short irons and wedges and try to hole the short putts.”

Bouch – a fourth year BEd Education in Human Movement Sciences and Mathematics at the University of Pretoria – mixed a lone birdie with two bogeys during her outward loop, but the Benoni golfer was flawless on her back nine and signed for 72.

“It was overcast and we had quite a few drizzles during the round,” said Bouch. “I had a couple of drops early on, but then I made 13 pars in a row to finish one-over.

“The wind was a little tricky, because you couldn’t always feel it, like at the par five sixth. I had to punch out and had 154 metres to the flag. I took a 6-iron, but came up short and when we got to the green, I could really feel the wind.

“I hit the driver, the long irons and the shorter irons really well, but I didn’t make the putts. I find them really tricky to read. They are quite a bit slower than what I’m used to and I can’t judge yet when to go with the grain or the slope. If I can get the putting sorted, I could put together a low score.”

Their team-mate Zethu Myeki is third after returning a non-counting 75, with Eswatini’s Petrone Rudolph fourth after carding 78 and Margret Nyamukondiwa from Zimbabwe fifth with an opening 83.

Myeki, a member of the GolfRSA Elite Squad, flew out of the blocks with a birdie start, but lost the advantage with a bogey at the par four third.

“I hit a great drive down the first and pitching wedge to two feet at the first and holed the putt, but that was the only time I found the hole. It was one of those days where the stroke was good, but the putts just didn’t drop,” said the Golf Club Management student. “I hit a lot of great tee shots and my approach shots were really good, but the putter stayed stone cold.”

“During the practice round the course was dry and the greens were firm, but because of the rain last night and today, the greens were soft, so you had to attack the pins,” said Myeki.

“I had a lot of chances between six and 10 feet and just kept missing the putts. It was frustrating, but the rest of my game was so solid – I just have to come to grips with the greens tomorrow.”

Petrone and Theresa Fawcett combined for Eswatini’s 163 total, while Yolande Mubayiwa supported Nyamukondiwa with a round of 86.

The prestigious Regional All-Africa Challenge Trophy is one of four events held biennially in West Africa, Southern Africa, North Africa and East/Central Africa. All the events are financially supported by the Royal and Ancient of St Andrews (R&A).